Tunnel Diode Construction and Working – The tunnel diode (sometimes called the Esaki diode after its inventor, Dr. Leo Esaki) is a high conductivity, heavily doped two-terminal P-N junction. This diode differs from the normal P-N junction diode in the amount of impurity concentration. The impurity concentration in a normal P-N junction diode is about 1 part in 108, whereas in the tunnel diode the impurity concen­tration is about 1 part in 103. Because of heavy doping depletion layer width is reduced to an extremely small value of the order of 10-5 mm: reverse breakdown voltage is also reduced to a very small value (approaching zero) resulting in appearance of the diode to be broken for any reverse voltage, and a -ve resistance section is produced in volt-ampere characteristic of the diode. It is found that the reduced depletion layer can result in carriers ‘punching through’ the junction with the velocity of light even when they do not possess enough energy to overcome the potential barrier. The result is that large forward current is produced at relatively low forward voltage (less than 100 mV). Such a mechanism of conduction in which charge carriers (possessing very little energy) punch through a barrier directly instead of climbing over it is called tunneling. That is why such diodes are called the tunnel diodes. Because of heavy doping the tunnel diode can conduct in reverse as well as in forward direction but it is usually used in forward-biased mode.

Tunnel Diode Construction are usually fabricated from germanium, gallium arsenide or gallium antimonide. Silicon is not used in the tunnel diode construction, because the ratio of peak value of forward current to the value of valley current (i.e., IP/IV) is maximum in case of gallium arsenide (approximately 20) and comparatively smaller for germanium (roughly 10) but very small in case of silicon (about 3). 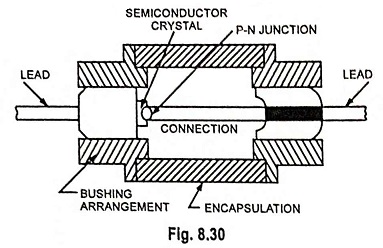 Tunnel diodes are ordinarily manufactured by alloying from gallium arsenide. The source materials are highly doped semiconductor crystals with an impurity concentration of the order of 1025 per cubic metre or more. Tunnel Diode Construction arrangement is shown in Fig. 8.30. 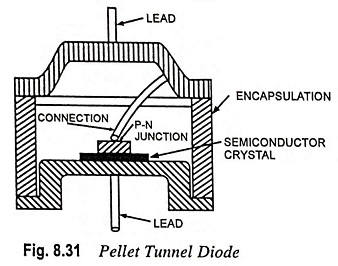 An alternative Tunnel Diode construction arrangement is shown in Fig. 8.31. Such a tunnel diode is called the pellet tunnel diode.

It is to be noted that the tunnel diode, being a low power device, can be easily damaged by heat and static electricity. 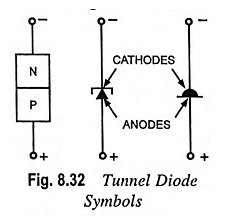 The commonly used schematic symbols for the tunnel diodes are shown in Fig. 8.32. 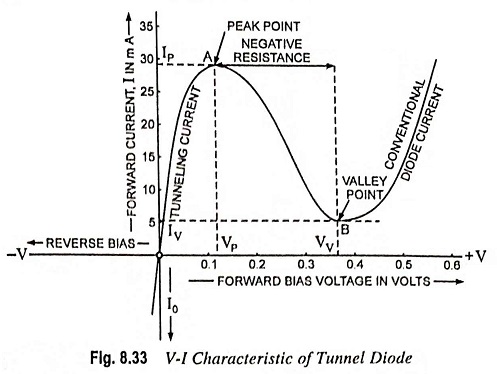 Volt-Ampere Characteristic: Forward V-I characteristic of a tunnel diode is illustrated in Fig. 8.33. Forward bias produces immediate conduction—as soon as forward bias is applied, significant current is produced. The current attains quickly its peak value, IP when the applied forward bias attains a value of VP volts. The current variation in the vicinity of origin is due to quantum mechanical tunneling of electrons through narrow space charge region of the junction. With the further increase in forward voltage, the diode current starts decreasing till it attains its minimum value, called the valley current IV corresponding to valley voltage VV. Thus from peak point A to valley point B the diode current falls with the increase in voltage resulting in negative resistance in this region. In fact this portion AB of the characteristic constitutes the most useful property of the diode. In this region the diode, instead of absorbing power, produces power.

So the tunnel diode can be used as a very high-frequency oscillator. For voltages higher than valley voltage VV current starts increasing as in any normal diode.

Depletion Region and Energy Band Diagrams: The tunneling phenomenon can be explained with the help of energy band diagrams of P- and N-type semiconductor materials.

Because of heavy doping in case of tunnel diode, the depletion region is extremely narrow and, therefore, it does not constitute much of a barrier to the electron flow. As a result, a small forward or reverse bias (not large enough to overcome the barrier potential) can provide charge carriers sufficient energy to cross the depletion region. When this occurs, the charge carriers are said to be tunneling through the barrier. 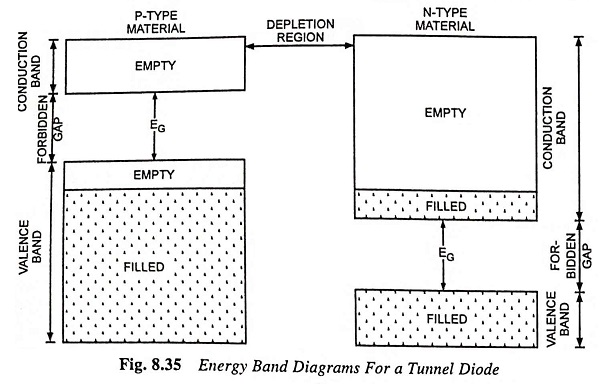 The energy band diagram for a heavily doped unbiased P-N junction is shown in Fig. 8.35. Note that the depletion region is very narrow and the filled levels on the N-side are exactly opposite those on the P-side. In this condition, no tunneling occurs as there are no empty lower energy levels to which electrons from either side might cross the depletion region. It is also to be noted that the conduction and valence bands on P-side are (negatively) higher than those on the N-side. This is due to formation of depletion region and barrier potential as a result of electrons crossing from the N-region to the P-region. The N-region has lost negative charges and P-region has gained them.

Parameters for a typical tunnel diode are given below :

Advantages and Disadvantages of Tunnel Diodes:

The disadvantages of the tunnel diodes are its low output-voltage swing and being a two-terminal device, it cannot provide isolation between the input and output circuits.

The tunnel diode can be used as an amplifier, an oscillator, or a switch. Because of very fast response to inputs, it is almost exclusively a high frequency component. The tunnel diode is, however, not widely used because it is a low current device and also that other better devices are available for the operations listed above.