Tunnel Diode Operation – A tunnel diode (sometimes called an Esaki diode after its inventor, Leo Esaki) is a two-terminal negative resistance device that can be employed as an amplifier, an oscillator, or a switch. Recall from earlier topics that the width of the depletion region at a pn-junction depends upon the doping density of the semi-conductor material. 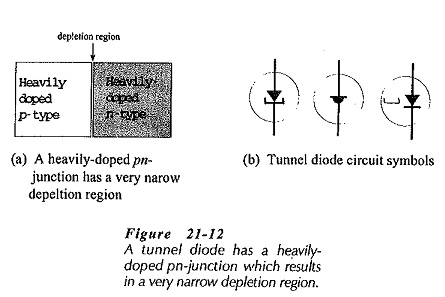 When a Tunnel Diode Operation junction is reverse biased, (negative on the p-side, positive on the n-side), substantial current flow occurs due to the tunnelling effect, (electrons moving from the p-side to the n-­side). Increasing levels of reverse bias voltage produce more tunnelling and a greater reverse current. So, as shown in Fig. 21­-13, the reverse characteristic of a tunnel diode is linear, just like that of a resistor.

A forward biased Tunnel Diode Operation initially behaves like a reverse biased device. Electron tunnelling occurs from the n-side to the Aside, and the forward current (IF) continues to increase with increasing levels of forward voltage (EF). Eventually, a peak level of tunnelling is reached, and then further increase in EF, actually causes IF to decrease. (See the forward characteristic in Fig. 21-13.) The decrease in IF, with increasing EF, continues until the normal process of current flow across a forward biased junction begins to take over when the bias voltage becomes large enough to overcome the barrier potential. IF now commences to increase with increasing levels of EF, so that the final portion of the tunnel diode forward characteristics is similar to that for an ordinary pri­junction. The shape of the tunnel diode characteristics can be explained in terms of energy band diagrams for the semiconductor material.

When a voltage is applied to a resistance, the current normally increases as the applied voltage is increased. Between IP and Iv on the tunnel diode characteristic, IF actually decreases as EF is increased. So, this region of the characteristic is named the negative resistance region, and the negative resistance (RD) of the tunnel diode is its most important property.

It is shown earlier that a straight-line approximation of diode characteristics can sometimes be conveniently employed. For a tunnel diode, the piecewise linear characteristics can usually be constructed from data provided by the device manufacturer.