The basic construction, equivalent circuit, graphic symbol and TRIAC Operation and Characteristics are shown in Fig. 19-21. The TRIAC behaves as two inverse-parallel connected SCRs with a single gate terminal. Sections n1,p2,n3, and p3, in Fig. 19-21(a) form one SCR that can be represented by transistors Q1 and Q2 in Fig. 19-21(b). Similarly, p1, n2, p2, and n4, form another SCR with the transistor equivalent circuit Q3 and Q4. Layer p2, common to the two SCRs, functions as a gate for both sections of the device. The two outer terminals cannot be identified as anode and cathode; instead they are designated main terminal 1 (MT1) and main terminal 2 (MT2), as illustrated. The TRIAC circuit symbol is composed of two inverse-parallel connected SCR symbols, [Fig. 19-21(c)]. 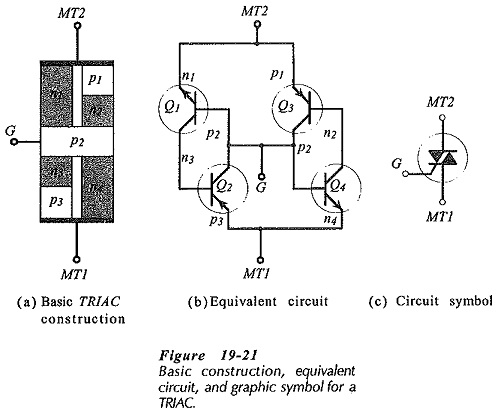 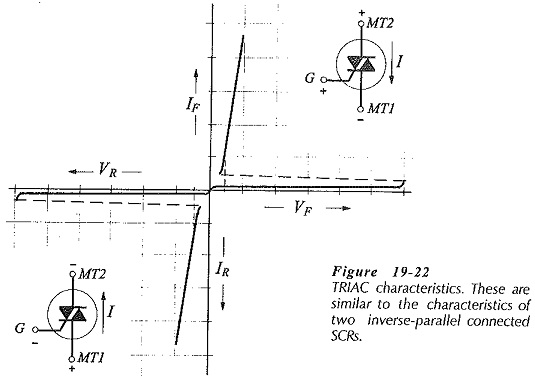 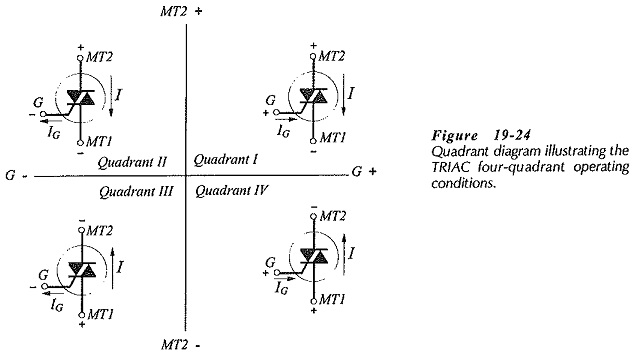 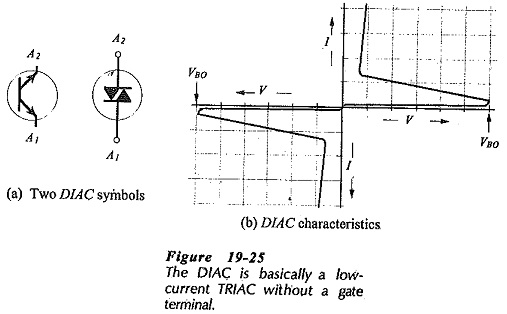 A DIAC is basically a low-current TRIAC without a gate terminal. Switch-on is effected by raising the applied voltage to the breakover voltage. Two different DIAC symbols in general use are shown in Fig. 19-25(a), and typical DIAC characteristics are illustrated in Fig. 19-25(b). Note that the terminals are identified as anode 2 (A2) and anode 1 (A1). Figure 19-26 shows partial specifications for two DIACs. The HS-10 has a switching voltage that ranges from a minimum of 8 V to a maximum of 12 V. Switching current is a maximum of 400 μA. The HS-60 switching voltage is 56 V to 70 V, and maximum switching current is 50 μA. Both devices have a 250 mW power dissipation, and each is contained in a cylindrical low-current diode-type package. DIACs are most often applied in triggering circuit for SCRs and TRIACs.