Earlier Unbalanced Rotor Impedance Operation were employed for starting and speed control. They are not in use any more. However, a loose contact in the rotor circuit can cause unbalance in the rotor resistance. It is therefore useful to examine the effect of unbalance on motor performance.

The negative sequence, components produce a rotating field which moves with respect to rotor at a speed (-sωms) and in space at a speed of ωms(1 – 2s). This field induces currents in the stator. Interaction between these currents and the negative sequence rotor field, produces a torque. For (0 ≤ s ≤ 0.5), the speed of negative sequence rotor field is positive, therefore, interaction between this field and stator currents induced by it, produces a positive torque on the stator and consequently a negative torque on the rotor. Thus for (0 ≤ s ≤ 0.5), torque acting on rotor is the difference between positive and negative sequence torques. Similarly, it can be explained that for (0.5 ≤ s ≤ 1), the two torques add.

Figure 6.5 shows the nature of the motor speed-torque characteristics. A large dip in torque occurs at half of synchronous speed. The extreme case of rotor unbalance arises when single phasing occurs in rotor. In this torque developed by the machine at s = 0.5 will be zero, and the motor may not accelerate beyond this point in starting. 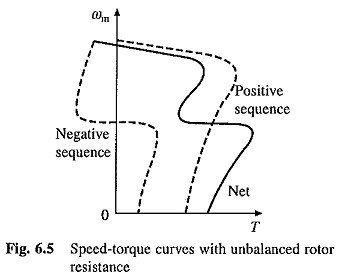 If one phase of the stator also gets opened at the same time, so that the machine operates with single phase stator and rotor, voltages appearing across open phases may reach values considerably higher.