A rotor design, which though more expensive gives still better starting, and running performances than the deep-bar design, is the Double Cage Rotor Induction Motor. The double squirrel cage induction motor winding in this design consists of two layers of bars short-circuited by end rings. The upper bars have a smaller cross-sectional area than the lower bars and consequently a higher resistance. The slots accommodating the two sets of bars are joined by a constriction as shown in Fig. 9.54 which also shows the slot-leakage flux pattern for the Double Cage Rotor Induction Motor. 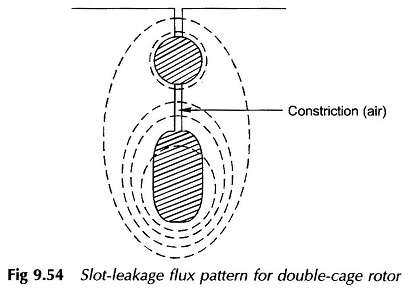 By arguments similar to those presented for the deep-bar rotor construction, it is seen that the upper bars have a much lower leakage flux linkage and, therefore, a much lower reactance. Furthermore, the self-leakage flux linking the upper/lower bars can be controlled by the dimension of the air-constriction. The constriction is also necessary because of the fact that in its absence the main flux will return via the iron path between the two slots thereby “missing” the outer bars which then would not contribute to torque development.

It is then found that the outer cage has high resistance and low reactance while the inner cage has low resistance and high reactance. Therefore, in the starting, the current is mainly confined to the outer cage with a consequent decrease in starting current and an increase in starting torque. Under running condition the reactance difference between the two cages evens out because of low frequency of rotor currents such that these act to conduct current in inverse proportion to their dc resistances and as a group present a low-resistance rotor to the air-gap flux giving an excellent running performance.

Since the starting current is mainly confined to the upper cage, this design is susceptible to frequent starting which would cause overheating and burning out of the upper high-resistance cage.

Another type of a Double Cage Rotor Induction Motor construction in which the two cages are placed in staggered slots is shown in Fig. 9.55 along with its slot-leakage flux pattern. 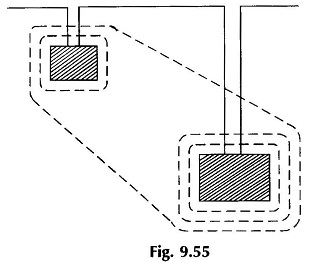 The two cages though somewhat coupled magnetically can be treated as independent for simplified yet fairly accurate analysis. The approximate circuit model of the Double Cage Rotor Induction Motor on this assumption is given in Fig. 9.56. The resultant torque-slip characteristic as obtained by summation of the torque developed by the inner and outer cages is shown in Fig. 9.57. 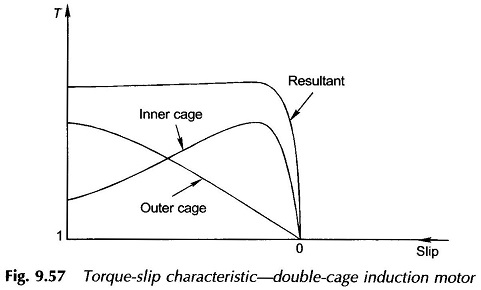