In this type of Deep Bar Rotor Induction Motor construction, bars of narrow width are laid down in deep semi-enclosed  slots as shown in Fig. 9.52. 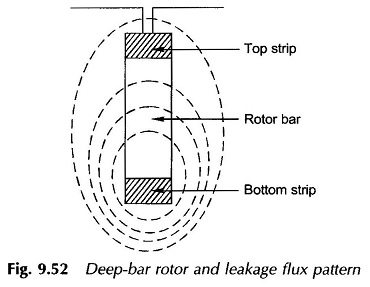 As a consequence, the starting reactance (50-Hz reactance) for the bottom strip is much larger than that of the top strip. It then follows that the current in the top strip is much more than the current in the bottom strip and further the top-strip current somewhat leads the bottom-strip current because of its lower reactance. Similar arguments when applied to other elementary strips would reveal that the current is unevenly distributed over the bar cross-section with the current density progressively increasing while moving upwards from the bottom strip. Nonuniform current distribution causes greater ohmic loss meaning thereby that the effective bar resistance becomes much more than its dc resistance As the rotor speeds up to a value close to synchronous, the frequency of rotor currents (f2 = sf) becomes very low. 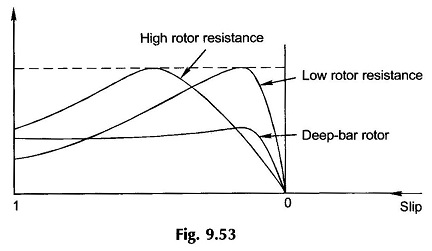 A Deep Bar Rotor Induction Motor, therefore, has a low starting current and a high starting torque and a low running resistance which means that it can satisfactorily meet both the desired starting and running performances. Since the net rotor reactance at standstill is somewhat higher than in a normal bar design, the breakdown torque is somewhat lower. The torque-slip characteristic of a Deep Bar Rotor Induction Motor compared to a normal-bar design with low and high rotor resistance is illustrated in Fig. 9.53.