Chopper Resistance in the Rotor Circuit: 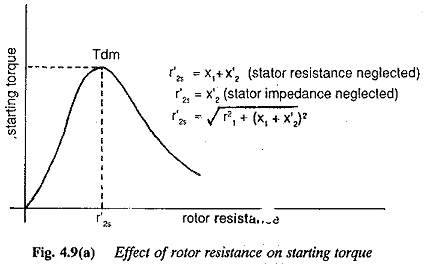 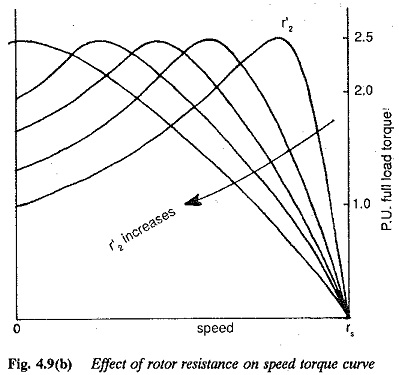 where R′2 is the rotor resistance and R′ex is the resistance included.

The external resistance can be added very conveniently to the phases of a slip ring rotor. Conventional methods of variation of resistance by means of mechanical contactors are shown in Fig. 4.10. With the development of thyristors it has become possible to use a Chopper Resistance in the rotor circuit. The schematic diagram is shown in Fig. 4.11. 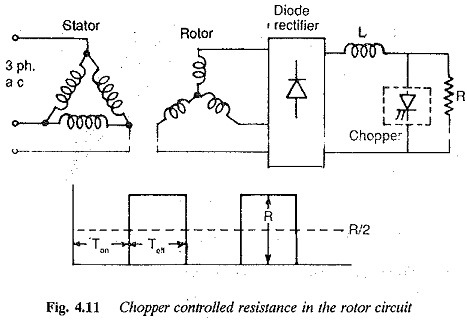 The slip power of the rotor is rectified by a diode rectifier and is fed to the chopper controlled resistance (Fig. 4.11). The torque-speed curves can be drawn for different time ratios. For a time ratio of 1 we get normal characteristic of the motor. For a time ratio of 0 the characteristic corresponds to the one with complete resistance in the rotor circuit. A smoothing inductance L is used in the circuit to maintain the current at a constant value. Any short circuit in the Chopper Resistance does not become effective due to L.

The value of It connected across the Chopper Resistance is effective for all phases and its value can be related to the resistance to be connected in each phase if the conventional method has been used. Thus if Rex is the resistance per phase we have

But for a three phase bridge rectifier we have

Using this relation in Eq. 4.7 we have

The rating of the chopper thyristor decides the maximum rotor current of the motor. The speed control range is limited by the resistance. The method is very inefficient because of losses in the resistance. It is suitable for intermittent loads such as elevators. At low speeds, in particular, the motor has very poor efficiency. Because of the increased rotor resistance, the power factor is better.

The rotor current in this case is non-sinusoidal. The harmonics of the rotor current produce torque pulsations. These have a frequency which is six times the slip frequency. The maximum torque developed is decided by the current carrying capacity. 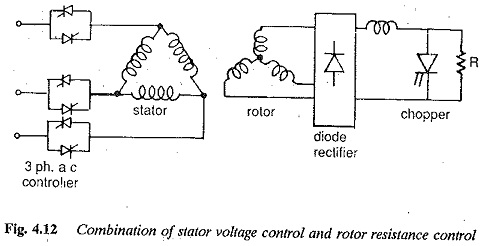