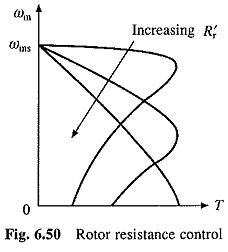 Major disadvantage is low efficiency due to additional losses in resistor connected in the rotor circuit. As the losses mainly take place in the external resistor they do not-heat the motor.

A number of methods are used for obtaining variable resistance. In drum controllers, resistance is varied by using rotary switches and a resistance divided in few steps. Variable resistance can also be obtained by using contactors and resistors in series. High power applications use a slip-regulator, which consists of three electrodes submerged in an electrolyte, consisting of saline water. Resistance is varied by changing the distance between electrodes and earth electrode. When the power is high, electrodes are driven by a small motor. Advantage of this method is that resistance can be changed steplessly.

Rotor resistance can also be varied steplessly using circuit of Fig. 6.51. The ac output voltage of rotor is rectified by a diode bridge and fed to a parallel combination of a fixed resistance R and a semiconductor switch realized by a transistor Tr (Fig. 6.51).

Effective value of resistance across terminals A and B, RAB, is varied by varying duty ratio of transistor Tr, which in turn varies rotor circuit resistance. Inductance Ld is added to reduce ripple and discontinuity in the dc link current Id. Rotor current waveform will be as shown. in Fig. 6.5104 when the ripple is neglected. Thus rms rotor current will be

Power consumed by RAB is

A closed-loop speed control scheme with inner current control loop is shown in Fig. 6.52. Rotor current Ir and therefore, Id has a constant value at the maximum torque point, both during motoring and plugging. If the current limiter is made to saturate at this current, the drive will accelerate and decelerate at the maximum torque, giving very fast transient response. For plugging to occur, arrangement will have to be made for reversal of phase sequence. 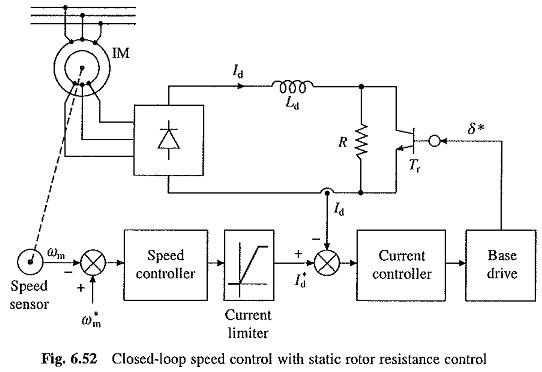