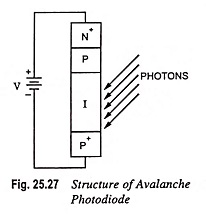 The structure of an avalanche photodiodes is shown in Fig. 25.27. It has four regions N+ and P+ are heavily doped semiconductors and I region is very lightly doped.

For detection of low-level optical signals, it is often desir­able to operate the photodiode in the avalanche region of its char­acteristic.

In the avalanche photodiodes junction must be uniform, and the guard ring is usually employed to ensure against edge breakdown. With proper design a silicon ava­lanche photodiodes can have high sensitivity to low-level optical signals, and the re­sponse time is in the neighborhood of 1 ns. These devices are particularly useful in fibre optic communication systems.