The device described in previous section was the first type employed in the early development of semiconductor lasers. It is known as an homojunction laser because it contains only one junction in a single type of material. Multiple layers have to be built-up in the laser structure to develop more efficient lasers operating at room temperature. These devices are called heterojunction lasers, and can be operated continuously at room temperature to meet with the optical communication needs. 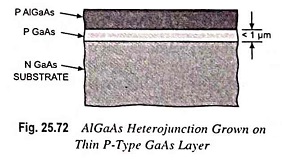 In the structure shown in Fig. 25.72, the injected carriers are confined to a narrow region in order that population inversion can be built-up at lower current levels. This results in a lowering of the threshold current at which the laser action begins.

A further improvement can be had by sandwiching the active GaAs layer between two AlGaAs layers. This double­heterojunction structure further confines injected carriers to the active region, and the change in refractive index at the GaAs —AlGaAs boundaries assists in confining the produced light waves. In the double heterojunction lasers depicted in Fig. 25.73 (b), the injected current is restricted to a narrow-stripe along the lasing direction, in order that the total current required to drive the device is reduced. This type of laser was a major step forward in the development of lasers for fibre optic communications. 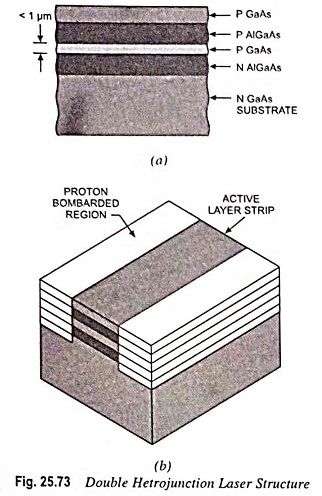 One of the drawback of the double heterojunction laser depicted in Fig. 25.73 is the fact that the carrier confinement and the optical waveguiding both depend on the same heterojunctions. It will be much better to optimize these two junctions by making use of a narrow confinement region in order to keep the carriers in a region of high recombination, and a somewhat wider optical waveguide region.