Light dependent resistors (LDRs) are made from cadmium sulphide containing no or very few free electrons when not illuminated. Its resistance is then quite high. When it absorbs light, electrons are liberated and the conductivity of the material increases. Cadmium sulphide (CdS) is, therefore, a photoconductor. The approximate relationship between the resistance and illumination is

where E is illumination in lux, R is resistance in ohms, A and α are constants. The value of α depends on the cadmium sulphide used and on the manufacturing process. Values around 0.7 to 0.9 are quite common. The relationship between the resistance R and the illumination E is shown graphically in Fig. 25.13. The resistance rises to several megaohms under dark conditions.

The basic construction and symbol for LDR are shown in Figs. 25.14 (a) and 25.14 (b) respectively. The device consists of a pair of metal film contacts separated by a snake-like track of cadmium sulphide film, designed to provide the maximum possible contact area with the two metal films. The structure is housed in a clear plastic or resin case, to provide free access to external light. Practical Light Dependent Resistors are available in a variety of sizes and package styles, the most popular size having a face diameter of roughly 10 mm. 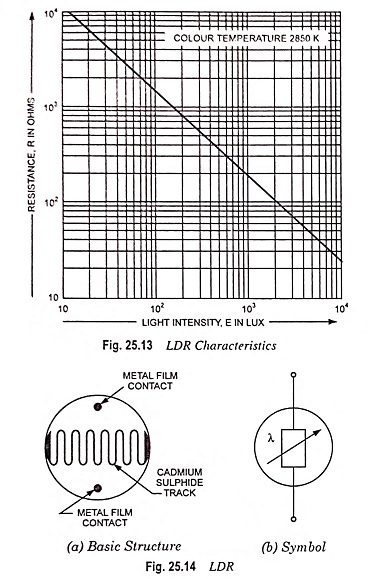 Spectral Response: The resistors are only light dependent over a limited range of wavelengths. Light Dependent Resistors have their maximum response at about 680 nm.

Temperature Dependency: Electrons can be excited not only by photons but also by thermal agitation. The dark resistance is, therefore, not infinite at normal temperatures. It increases with the ambient temperature and can be reduced by cooling the device.

Recovery Rate: When an LDR is brought from a certain illuminating level into total darkness, the resistance does not increase immediately to the dark value. The recovery rate is specified in kΩ/second and for current LDR types it is more than 200 kΩ/second (during the first 20 seconds starting at a light level of 1,000 lux). The recovery rate is much greater in the reverse direction, e.g. going from darkness to illumination level of 300 lux, it takes less than 10 ms to reach a resistance which corresponds with a light level of 400 lux.

Light Dependent Resistors are sensitive, inexpensive, and readily available devices. They have good power and voltage handling capabilities, similar to those of a conventional resistor. Their only significant defect is that they are fairly low acting, taking tens or hundreds of milliseconds to respond to sudden changes in light level. Useful practical applications of LDRs include light and dark-activated switches and alarms, light beam alarms and reflective smoke alarms etc. 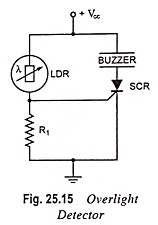 An overlight detector is shown in Fig. 25.15. The LDR is a variable resistor whose resistance decreases with the increase in light intensity. When the light falling on an LDR has normal intensity, its resistance is large enough and the voltage across R1 is insufficient to trigger the SCR. However, when light falling on LDR is of large intensity, the resistance of LDR falls and voltage drop across R1 becomes large enough to trigger the SCR. Consequently, the buzzer sounds the alarm. It may be noted that if the strong light disappears, the buzzer continues to sound the alarm. It is because once the SCR is fired, the gate loses all control.