When no battery is connected between the different terminals of a transistor, the transistor is said to be in an unbiased state or in an open-circuit state. 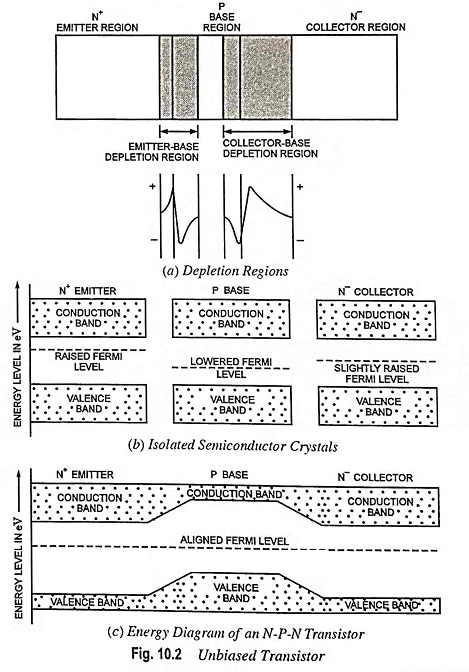 We also know that when an N-type region is formed next to a P-type region, a barrier potential (0.7 V in case of Si and 0.3 V in case of Ge at room temperature) is produced at the P-N junction. The free electrons in the N-region diffuse into the adjacent P-region to annihilate holes. Consequently, a layer of positive ions is formed on the N side, and a layer of negative ions is formed on the P-side. This serves to create the barrier potential.

The same phenomenon occurs at both the P-N junctions found in the N-P-N transistor structure [Fig. 10.2(a)]. The depletion regions (ionization layers), which are formed, extend into the semiconductor crystal as a function of the doping levels. Specifically, it extends deeply into the lightly doped regions, and slightly into the heavily doped regions. Since emitter is heavily doped than base and collector, the emitter-base depletion region width is smaller than that of collector-base depletion region width. Note that the barrier potentials are negative on the base and positive on the emitter and collector for the N-P-N device. In case of P-N-P device it would be just reverse i.e., positive on the base and negative on emitter and collector. This transistor action is illustrated in Fig. 10.2(a).

The formation of barrier potential corresponds to the alignment of the Fermi levels throughout the crystals. Fermi level alignment produces a distortion in the valence and conduction energy bands, as illustrated in Figs. 10.2(b) and 10.2(c). 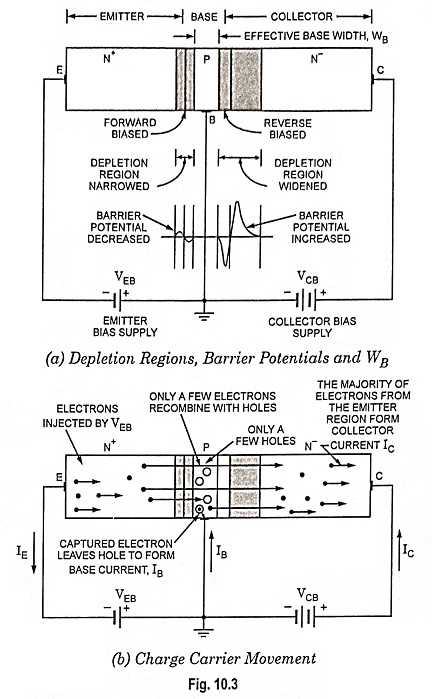 The forward bias at the emitter-base junction reduces the barrier potential and narrows the depletion region. However, the relatively lightly doped base and collector regions produce a wide depletion region under the reverse bias. The noteworthy point is that the effective base width Wb between the two depletion regions is very narrow. This transistor action is illustrated in Fig. 10.3(a).

The operation of the transistor may also be examined by means of its energy band diagram. Since the forward bias tends to align the valence and conduction energy bands, while reverse bias tends to increase their misalignment, the diagram shown in Fig. 10.4 is arrived at. As can be seen from Fig. 10.4, electrons must lose energy to travel from the emitter region to the base region. Further, the electrons must also lose energy in moving from base region into collector region. Only a few of the electrons in the base region lose energy to recombine with the (valence band) hole. Typically, at least 95% of the electrons have a long enough lifetime to diffuse into the collector region. 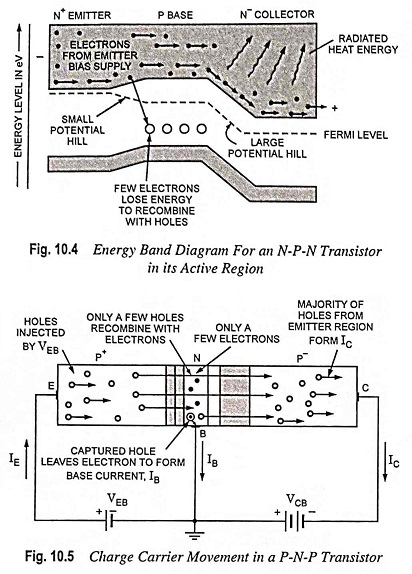 The P-N-P transistor behaves exactly the same way as an N-P-N device, with the exception that the majority charge carriers are holes. As illustrated in Fig. 10.5, holes are emitted from the P-type emitter across the forward-biased emitter-base junction into the base. In the lightly doped N-type base, the holes find few electrons to recombine with. Some of the holes flow out via the base terminal, but most are drawn across the collector by the positive-negative electric field at the reverse biased collector-base junction. As in the case of NPN device, the forward bias at the emitter base junction controls the collector and emitter currents.