A Switching Regulator Operation can be thought of as similar to a linear regulator, but with the series-pass transistor operating as a switch that is either off, or switched on (in a saturated state). The output voltage from the switch is a pulse waveform which is smoothed into a dc voltage by the action of an LC filter.

Switching Regulator Operation can be classified as:

The basic block diagram of a step-down Switching Regulator Operation in Fig. 17-27 consists of a transistor switch (Q1) (also termed a power switch), an oscillator, a voltage comparator, a voltage reference source, a diode (D1), and a filter. The switch, oscillator, comparator, and reference source are all usually contained within an integrated circuit controller, as illustrated. The filter usually consists of an inductor and capacitor.

The operation of the regulator is as follows:

In the operation described above, the controller can be thought of as a pulse width modulator; the on time of Q1 (pulse width of its output) is increased or decreased as necessary to supply the required output current. Other systems involve control of the switch off time.

Comparison of Linear and Switching Regulators:

The power dissipated in the series-pass transistor in a linear regulator is wasted power. This is not very important when the load current is lower than 500 mA. With high current levels, the regulator efficiency becomes important, and there can also be serious heat dissipation problems. 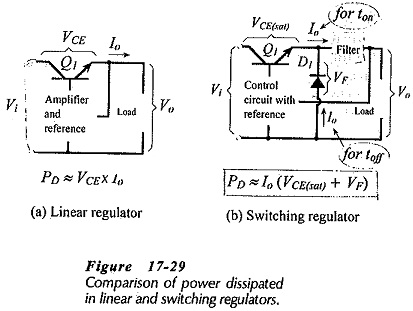 The approximate efficiency of a linear regulator can be calculated by assuming that the only wasted power (PD) is that dissipated in the series-pass transistor, [see Fig. 17-29(a)].

To estimate the efficiency of a switching regulator, it should be noted that D1 (in Fig. 17-27) is biased off when Q1 is on and that D1 is on when Q1 is off. So, the power dissipated in the switching transistor and diode can be taken as the total wasted power, [Fig. 17-29(b)]. The Q1 and D1 power dissipation can be calculated in terms of the actual current level in each device and the on and off times. This analysis shows that PD for each device, is simply [(average output current) x (device voltage drop)). So,