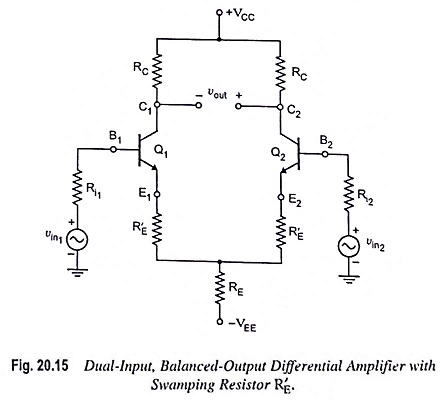 The emitter current in each transistor may be determined by KVL around the base-emitter loop of transistor Q1 with vin1 = 0 and vin2 = 0 V.

Omitting the subscripts because of symmetry between the two halves of the differential amplifier.

Substituting IB ≡ IE/βdc in above equation, we have

The above Eq. (20.39) is also valid for the remaining three configurations with swamp resistor R′E.

The voltage between collector and emitter, VCE is given by Eq. (20.6) and is given here for convenience

When external resistors R′E are inserted in each emitter lead, the new voltage gain and new input resistance can be obtained for any configuration simply by replacing r′e by (R′E + r′e). However, output resistance with or without R′E is the same.