Variable Resistor Network – The basic problem in converting a digital signal into an equivalent analog signal is to change the n digital voltage levels into one equivalent analog voltage. This can be achieved most easily by designing a Variable Resistor Network which changes each of the digital levels into an equivalent binary weight voltage (or current). To understand the meaning of equivalent binary weight consider the truth table for the 3 bit binary signal shown in Table 17.1.

Suppose we wish to change the 8 possible states of digital signals into equivalent analog voltages. The smallest number represented by 000 is OV and the largest number represented is 111. Let us make this signal equal to + 7V. This then establishes the range of the analog signal which will be developed. Now, between 000 and 111 there are seven discrete levels to be defined. Therefore, it is convenient to divide the analog signal into seven levels. 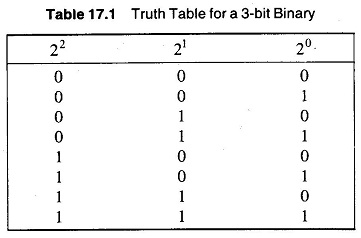 The smallest increment change in the digital signal is represented by the LSB (20). Hence we would like to have this bit cause a change in the analog output equal to 1/7 of the full scale analog output voltage. The resistive divider will then be designed such that a 1 in the 20 position causes + 7 x 1/7 = 1 V at the output.

The total sum of the weights must be equal to 1. Hence

In general, the binary equivalent weights assigned to the LSB is 1/2n – 1 where n is the number of bits.

A resistive divider having three digital inputs and an analog output is shown in Fig. 17.9. 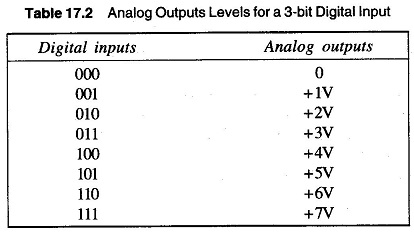 Hence the resistive ladder must do two things in order to change the digital input into an equivalent analog output.

A resistive ladder which performs the above functions is shown in Fig. 17.10. 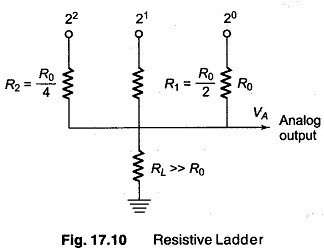 Assume that the digital input signal 001 is applied to this Variable Resistor Network. Using the levels as before, 0 = 0 V and 1 = +7 V. The equivalent circuit is shown in Fig. 17.11. RL. is considered very large, and hence neglected. 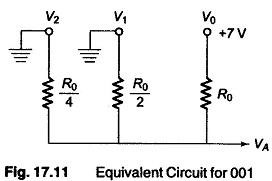 The analog output voltage VA can be easily determined by the use of Millman’s theorem.

In general, the following hold.

For these reasons, a second type of Variable Resistor Network, called a ladder is used.