The differential transformer is a passive inductive transformer. It is also known as a Linear Variable Differential Transformer  (LVDT). The basic construction is as shown in Fig. 13.19. 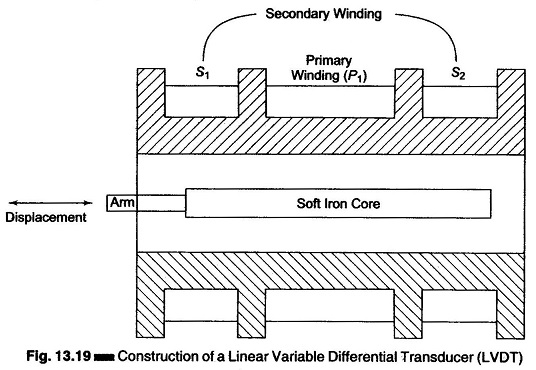 An movable soft iron core slides within the hollow former and therefore affects the magnetic coupling between the primary and the two secondaries.

The displacement to be measured is applied to an arm attached to the soft iron core.

(In practice, the core is made up of a nickel-iron alloy which is slotted longitudinally to reduce eddy current losses.)

When the core is in its normal (null) position, equal voltages are induced in the two secondary windings. The frequency of the ac applied to the primary winding ranges from 50 Hz to 20 kHz.

In order to convert the output from S1 to S2 into a single voltage signal, the two secondaries S1 and S2 are connected in series opposition, as shown in Fig. 13.20. 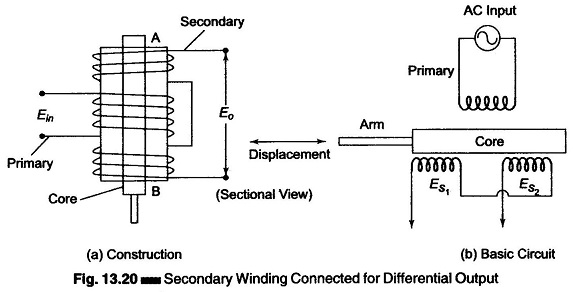 Similarly, if the core is moved to the right of the null position, the flux linking with winding S2 becomes greater than that linked with winding S1. This results in Es2 becoming larger than Es1. The output voltage in this case is Eo = Es2 – Es1 and is in phase with Es2.

The amount of voltage change in either secondary winding is proportional to the amount of movement of the core. Hence, we have an indication of the amount of linear motion. By noting which output is increasing or decreasing, the direction of motion can be determined. The output ac voltage inverts as the core passes the centre position. The farther the core moves from the centre, the greater the difference in value between Es1 and Es2 and consequently the greater the value of Eo. Hence, the amplitude is function of the distance the core has moved, and the polarity or phase indicates the direction of motion, as shown in Fig. 13.21. 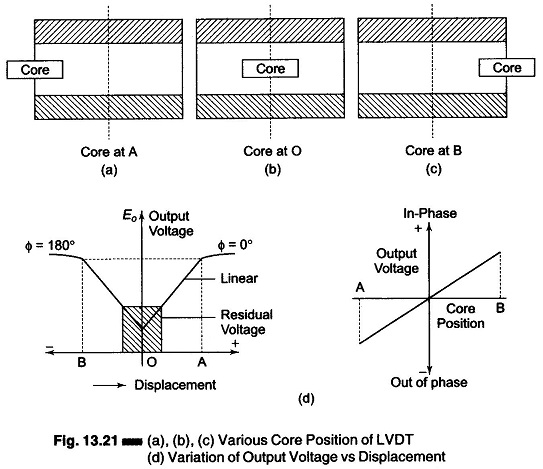 By comparing the magnitude and phase of the difference output voltage with that of the source, the amount and direction of the movement of the core and hence of the displacement may be determined.

The amount of output voltage may be measured to determine the displacement. The output signal may also be applied to a recorder or to a controller that can restore the moving system to its normal position.

The output voltage of an Linear Variable Differential Transformer is a linear function of the core displacement within a limited range of motion (say 5 mm from the null position).

Figure 13.21(d) shows the variation of the output voltage against displacement for various position of the core. The curve is practically linear for small displacements (up to 5 mm). Beyond this range, the curve starts to deviate.

The diagram in Figs 13.21(a), (b) and (c) shows the core of an Linear Variable Differential Transformer at three different positions.

When the core is moved to the left, as in Fig. 13.21(a) and is at A, Es1 is more than Es2 and Eo is positive. This movement represents a positive value and therefore the phase angle, is Φ = 0°.

One advantage of an Linear Variable Differential Transformer over, the inductive bridge type is that it produces higher output voltage for small changes in core position. Several commercial models that produce 50 mV/mm to 300 mV/mm are available. 300 mV/mm implies that a 1 mm displacement of the core produces a voltage output of 300 mV.

Linear Variable Differential Transformer are available with ranges as low as ± 0.05 in. to as high as ± 25 in. and are sensitive enough to be used to measure displacements of well below 0.001 in. They can be obtained for operation at temperatures as low as – 265°C and as high as + 600°C and are also available in radiation resistance designs for nuclear operations.