Linear integrated circuits and applications – The term IC means integrated circuit where all the components are fabricated on the same chip. Most of the ICs are produced by the monolithic process. In this process, all the active Elements like transistors and all the passive elements like resistances, capacitances are fabricated on a single piece of Semiconductor Material, generally silicon. This is called silicon.wafer or a substrate. Such a monolithic process makes low cost mass production of ICs possible.

With the help of ICs the circuit design becomes very simple. The variety of useful circuits can be built without the necessity of knowing about the complex internal circuitry.

The various advantages of Linear integrated circuits and applications are,

In addition to these important advantages, the ICs are used popularly because of versatility, flexibility and dependability.

Robert J. Widlar at Fairchild brought out the popular 741 integrated circuit (IC) op-amp between 1964 to 1968. The IC version of op-amp uses BJTs and FETs which are fabricated along with the other supporting components, on a single semiconductor chip or wafer which is of a pinhead size. With the help of IC op-amp, the circuit design becomes very simple. The variety of useful circuits can be built without the necessity of knowing about the complex internal circuitry. Moreover, IC op-amps are inexpensive, take up less space and consume less power. The IC op-amp has become an integral part of almost every electronic circuit which uses Linear integrated circuits and applications. The modern linear IC op-amp works at lower voltages. It is so low in cost that millions are now in use, annually. Because of their low cost, small size, versatility, flexibility, and dependability, op-amps are used in the fields of process control, communications, computers, power and signal sources, displays and measuring systems. The op-amp is basically an excellent high gain d.c. amplifier.

The symbol for an op-amp along with its various terminals, is shown in the Fig. 2.1 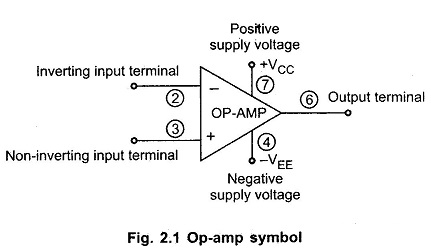 The op-amp is indicated basically by a triangle which points in the direction of the signal flow.

All the op-amps have at least following five terminals 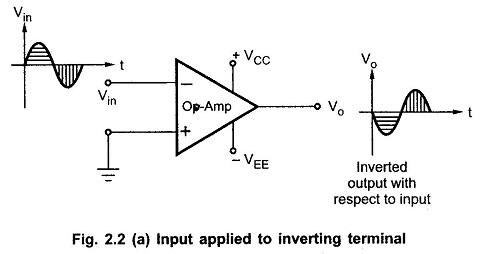 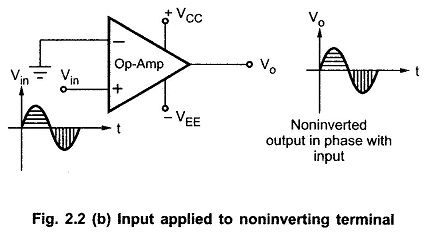 The op-amp is fabricated on a tiny silicon chip and packaged in a suitable case. Fine gauge wires are used to connect the chip to the external leads.

The op-amp works on a dual supply. A dual supply consists of two supply voltages both d.c., whose middle point is generally the ground terminal.

The dual supply is generally balanced i.e. the voltages of the positive supply +Vcc and that of the negative supply -VEE are same in magnitude. The typical commercially used power supply voltages are ± 15 V. But if the two voltage magnitudes are not same in a dual supply it is called as unbalanced dual supply. The balanced and unbalanced types of dual supply are shown in the Below Fig 2.3 (a) and (b) respectively. 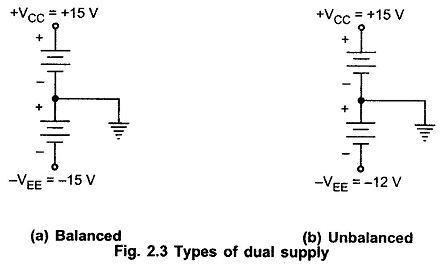