Non Linear Resistance are especially suitable, both from space and reliability considerations for small shunt currents in conditions where wire-wound resistors tend to be less satisfactory on mechanical grounds. Where heavy currents are involved, there may be difficulty in accommodating the relatively large volume of resistor material that is required. 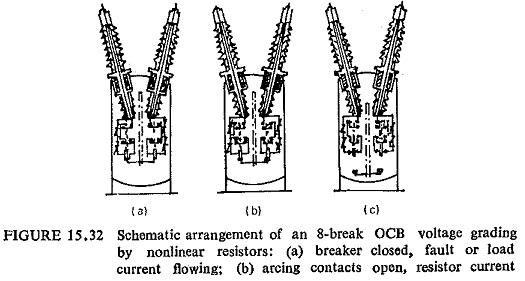 Non Linear Resistance are particularly suited to voltage division and overvoltage suppression applications in which relatively small current of the order of 1-10 A at normal crest voltage are adequate. They are not suitable for modification of RRRV and of the voltage peak. Figure (15.32) and Fig. (15.33) show the schematic arrangement for voltage grading with the help of nonlinear resistors in oil circuit breakers and air-blast circuit breakers respectively. 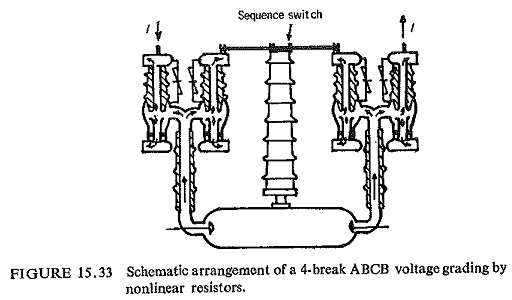 The nonlinear resistor ensures accurate voltage distribution across the breaks and, because of rapid increase in shunt current with rise in voltage, it suppresses overvoltages when switching small inductive currents (Fig. (15.34)). The shunt current is interrupted without difficulty by the sequence isolator in oil in case of oil circuit breaker. Although capacitance can also grade the voltage distribution across the multibreaks, it cannot damp the overvoltages. The Non Linear Resistance current can be so proportioned that it assists in the interruption of capacitive currents in a manner similar to that obtained by the use of linear resistors. 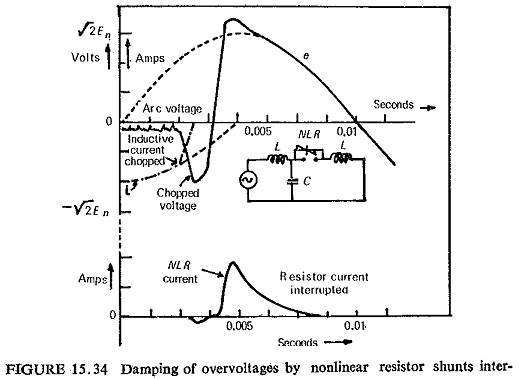 An approximate idea of the value of shunt resistor to perform various duties can be given as follows: