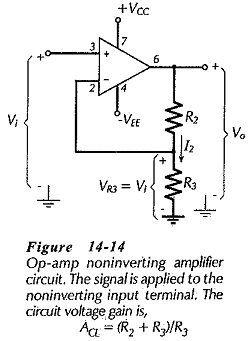 The voltage divider current (I2) is always selected to be very much larger than the operational amplifier input bias current, and

The circuit voltage gain is,

Figure 14-15 shows a Non Inverting Amplifier Theory with a resistor (R1) connected in series with the noninverting input terminal. As in the case of other op-amp circuits, this is done to equalize the resistor voltage drops produced by input bias current. In this case, R1 is selected to be approximately equal to the resistance ‘seen looking out of’ the inverting input terminal. Thus,

The input and output impedances for a Non Inverting Amplifier Theory are easily determined from the negative feedback equations. 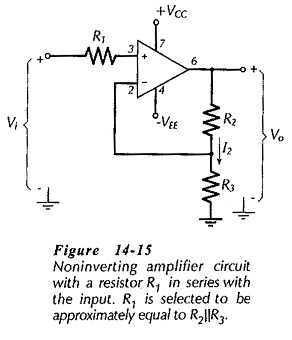 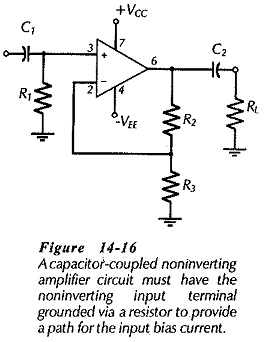 Resistors R1, R2 and R3 in the capacitor-coupled circuit are determined exactly as for a direct-coupled Non Inverting Amplifier Theory.