To analyse a network means to find current through any branch or voltage across any branch. We can analyse given network using Graph Theory Network Analysis by relating branch currents and loop currents or branch voltages and node voltages (across tree branches).

where [BT] is the transpose of fundamental circuit matrix [B].

When a current source is present across any branch then the total branch current will be the algebraic addition of branch current and branch input current of the source. Consider two conditions in a network as shown in the Fig. 5.17.

Consider Fig. 5.17 (a). The direction of the branch current and current source is same. Hence effective branch current flowing from terminal A to B is given by subtracting source current as

Consider Fig. 5.17 (b). The direction of the branch current and current source is opposite. Hence equivalent branch current flowing from terminal A to B is given by adding source current as,

In such special cases, relationship between branch currents, and loop currents can be modified in terms of source currents as follows,

where [Is] is a column matrix representing current source across each branch.

where [QT] is the transpose of fundamental cut-set matrix [Q]

When a voltage source is present in series branch then the total branch voltage is the algebraic addition of source voltage and voltage across branch. Consider general conditions in any network as shown in the Fig. 5.18.

where [Vs] represents a column matrix representing voltage sources in series with branches.

Network Equilibrium Equations on the Basis of Loop Analysis 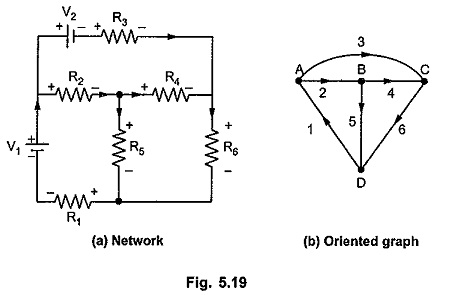 Let the branch currents in respective branches be i1, i2, i3, i4, i5 and i6 with the orientations same as those of branches. Consider a tree for oriented graph as shown in the Fig. 5.20 (a). 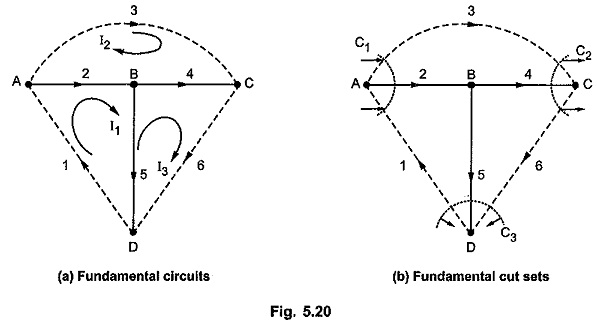 Let I1, I2 and I3 be the loop currents. The directions of loop currents are coinciding with the orientations of the links in the respective loops.

Then fundamental circuit matrix B is given by, 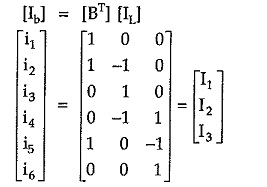 From above equation we can write,

In branch 2 there is no voltage source.

In all remaining branches, there is no voltage source.

Equations (A), (B) and (C) represents equilibrium equations for the given network on the basis of loop analysis.

Network Equilibrium Equations on the Basis of Node Analysis: 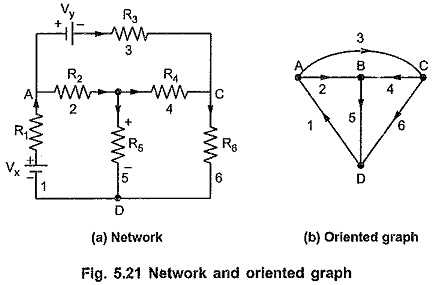 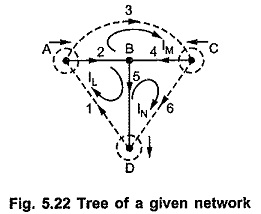 Node Analysis is based on Kirchhoff’s current law. For the given tree, we can write cut-set.

The above set of cut-set can be written in tabular form as follows :

Let branch voltages be denoted by E1, E2, E3, E4, E5 and E6. Let the voltages at nodes A, C, D be VA, VC and VD where node B is selected as datum node or reference node or zero potential node.

The branch voltages can be written as :

Also there is voltage source Vy present in branch 3.

As we have seen already, elements in a row represent a branch current and according to the Kirchhoff’s current law, the algebraic sum of the currents at any node is always zero, we can add all the elements of each row to get zero current at that node.

Substituting all these values in above equations, we have

The second equation can be written as,

The third equation can be written as,

Thus equations (A), (B), (C) will then become three independent equilibrium equations in terms of variables VA, VC and VD.

Then by solving all these equation simultaneously, we can get values of node voltages, branch voltages and branch currents.