A two-stage RC Coupled Transistor Amplifier using N-P-N transistors in CE configuration is shown in Fig. 16.12. The two transistors used are identical and use a common power supply VCC. The resistors R1, R2 and RE form the biasing and stabilization network. In this arrangement, the signal developed across collector resistor RC of the first stage is coupled to the base of the second stage through the coupling capacitor CC. As the coupling from one stage to the next is obtained by a coupling capacitor followed by a connection to a shunt resistor, therefore, such amplifiers are called Resistance-capacitance coupled or RC Coupled Transistor Amplifier. The input capacitor Cin couples ac signal voltage to the base of transistor Q1. In the absence of Cin the signal source will be in parallel with resistor R2 and the bias voltage of the base will be affected. Thus the function of Cin is to allow only the alternating current from signal source to flow into the input circuit. 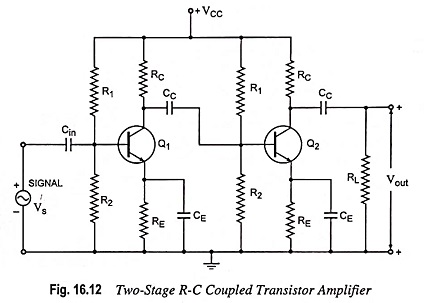 The emitter bypass capacitor CE, offers low reactance path to the signal. If it is not present, then the voltage drop across RE will reduce the effective voltage available across the base-emitter terminals (the input voltage) and thus reduces the gain.

When ac signal is applied to the base of the first amplifier, it appears in the amplified form across collector load RC. The amplified signal developed across RC is transmitted to the base of next stage of the amplifier through coupling capacitor CC. This is further amplified by the next stage and so on. Thus the cascade stages amplify the signal and thus the overall gain is considerably increased. The phase of output is the same as that of input because the phase is reversed twice by two transistors as they are in CE configuration.

It may be mentioned here that the overall gain is less than the product of the gains of individual stages. This is because when

a second stage is made to follow the first one, the effective load resistance of the first stage is reduced because of the shunting effect of the input resistance of the second stage. This reduces the gain of the stage which is loaded by the next stage. For example, in a 4-stage amplifier the gains of first three stages will be reduced due to loading effect of the subsequent stage. However, the gain of final or last stage (4th stage in this case) which has no loading effect of subsequent stage, remains unaffected. Thus the overall gain shall be less than the product of the gains of four stages.

For drawing approximate model of the circuit shown in Fig. 16.12, following assumptions are made.

The approximate model drawn with the above assumptions is shown in Fig. 16.13. 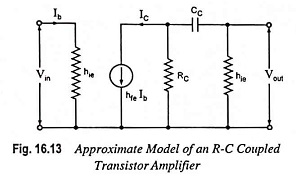 For the purpose of analysis the entire frequency range may be divided into the following three categories. 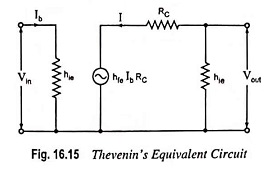 (b) Low Frequency Range: In low frequency range, the impedance offered by coupling capacitor CC is comparable to the collector resistance RC. It largely affects the current amplification. Therefore, it becomes necessary to include it in the equivalent circuit, as shown in Fig. 16.13

The magnitude of Avl is given by

From Eq. (16.46) it is obvious that in the low frequency range voltage gain decreases with the decrease in frequency.

(c) High Frequency Range: In high frequency range, the reactance offered by coupling capacitor CC is very small and it may be considered as a short circuit. 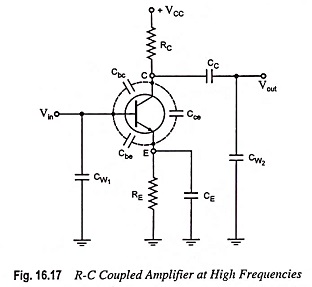 The feedback effect increases with the increase in frequency because with the increase in frequency reactive impedance of the capacitor decreases. The capacitance Cbe, between the base and emitter, offers a low impedance path at the input side at high frequencies. This reduces the input impedance of the device, and consequently effective input signal is reduced. Thus gain falls. Similarly, the capacitance Cce produces a shunting effect at high frequencies on the output side. It is noteworthy point that Cbc is the most important capacitance because feedback takes place from output circuit to input circuit through this capacitance. This is known as Miller effect. Besides these capacitances, there are wiring capacitances CW1 and CW2, as shown in Fig. 16.17. These are the capacitances between the connecting wires of the circuit and ground. 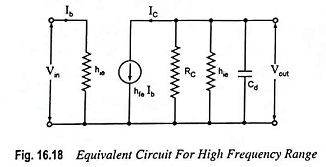 It can be shown that Cbe and Cbc may be replaced with a single capacitor Cd across the input resistance hie of the transistor. The value of shunt capacitance Cd in the input circuit of the first stage is small because it depends on the output impedance of the first transistor, which is small. But in the output circuit of the first stage Cd is increased by stray capacitance of the wiring. The reactance 1/ωCd will have appreciable shunting effect on R2 and hie. The equivalent circuits are given in Figs. 16.18 and 16.19. 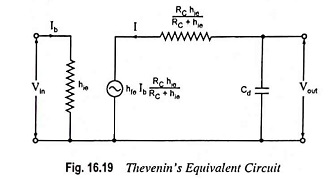 The magnitude of Avh is given by

From Eq. (16.50) it is obvious that with the increase in input frequency the magnitude of voltage gain falls off.

If f1 is the lower cutoff frequency, then

If f2 is the upper cutoff frequency then

Φh decreases with the increase in input frequency f. The variation of total phase shift between input and output voltages with frequency is shown in Fig. 16.20. 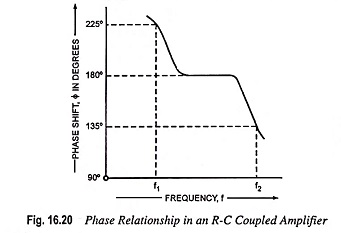 The frequency response curve of a typical RC Coupled Transistor Amplifier is shown in Fig. 16.21. 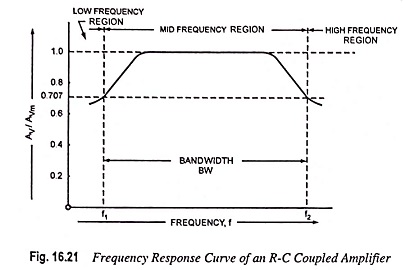 In mid frequency range (50 Hz – 20 kHz), the voltage gain of the amplifier is constant, as is obvious from the analysis. With the increase in the frequency in this range, the reactance of the coupling capacitor CC reduces thereby increasing the gain but at the same time lower capacitive reactance causes higher loading resulting in lower voltage gain. Thus the two effects cancel each other and uniform gain is obtained in mid frequency range.

The output section of the amplifier is shown in Fig. 16.22 from the ac point of view, for high frequency consider­ations. The capacitance Cs is the equivalent shunt capacitance as given by Eq. (16.64). In figure coupling and by­pass capacitors CC and CE are not shown as they effectively rep­resent short circuits at high frequencies. 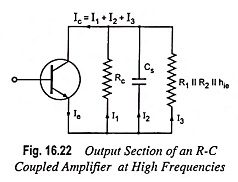 From circuit shown in Fig. 16.22, it is obvious that collector current Ic is made up of three currents I1, I2 and I3. With the increase in frequency of the input signal, the reactive impedance of the shunt capacitance Cs decreases, being inversely proportional to frequency, and as a result the current I2 through this capacitance Cs increases. This reduces both currents I1 and I3 since total current Ic = (l1 + l2 + l3) is almost constant. The output voltage Vout being the product of l3 and R (i.e. I3R) decreases. Thus higher the frequency, the lower is the impedance offered by Cs and lower will be the output voltage Vout.

when the bandwidth (BW) is multiplied by the gain at mid frequencies, gain-band width (GBW) is obtained.

Low voltage and power gain due to low resistance presented by the input of each stage to the preceding stage, tendency of becoming noisy with age, particularly in moist climates, and poor impedance matching due to difference in impedances of the RC Coupled Transistor Amplifier output and that of the speaker.

The RC Coupled Transistor Amplifier are widely used as voltage amplifiers (i.e. in the initial stages of public address systems) because of their excellent audio fidelity over a wide range of frequency. However, because of poor impedance matching, this type of coupling is rarely employed in the final stages.