The circuitry for the Class B Push Pull Amplifier operation is the same as that for the class A operation except that the devices are biased at cutoff. The transistor circuit of Fig. 17.25 operates as class B if R2 = 0 because a transistor is essentially at cutoff if the base is shorted to the emitter. 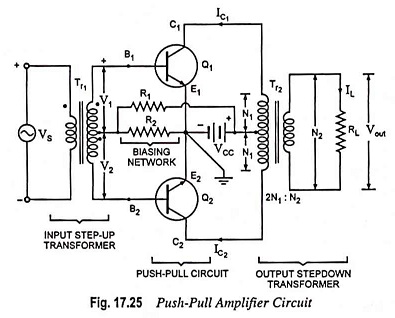 The advantages of class B operation over class A operation are given below :

Because of above advantages, a push-pull class B transistor circuit is preferred in systems where the power supply is limited, such as those operating from solar cells or a battery. The automatic cancellation of all even-order har­monics from the output makes class B push pull amplifier highly desirable for communication sound equipment.

The drawbacks of class B push pull amplifiers are that the harmonic distortion is higher, self-bias cannot be used, and the supply voltages must have good regula­tion.

class B push pull amplifier are widely employed for audio work in por­table record-players, as stereo amplifiers and in high-fidelity radio receivers.

When the input signal is applied, the centre tapped secondary of the input transformer develops two signals which are identical but in phase opposition. The transistors, Q1 and Q2 are driven by these two signals. Thus when V1 is going positive, V2 is going negative, so that transistor Q2 is being biased further off when transistor Q1 is being biased on. As the collector current in Q1 increases from zero, it produces a half sine wave of voltage across the upper half of the primary of the output transformer, as shown. When the positive half cycle of the input signal to Q1 begins to go negative, the signal at Q2 base is commencing to go positive. Thus, as Q1 becomes biased off again, Q2 is biased on and a half cycle of voltage waveform is generated across the lower primary winding of output transformer.

The effect of the two half cycles in separate halves of the primary of output transformer is to produce a magnetic flux in the transformer core, which flows first in one direction and then in the opposite direction. This flux links with the secondary of the output transformer and generates a complete sine wave output, which is passed on to the load. In the class B circuit, the two output transistors are said to be operating in push-pull.

As explained above, a full sine wave is developed at the output of the transformer. When no signal is present, both transistors remain off, and thus no current is drawn from dc supply source VCC. Hence there is no dissipation of power with zero signal. Some power is dissipated in each transistor only while the transistor is conducting.

Conversion Efficiency of Class B Amplifier:

where Idc is the average or direct current taken from the dc supply VCC.

In class B operation the current drawn from a single power supply is a full-wave rectified signal, thus

where R′L is reflected load resistance