Class A Circuit – Instead of capacitor coupling, a Transformer Coupled Class A Amplifier may be used to ac couple amplifier stages while providing dc isolation between stages. The resistance of the transformer windings is normally very small, so that there is no effect on the transistor bias conditions.

Figure 18-1 shows a load resistance (RL) transformer-coupled to a transistor collector. The low resistance of the transformer primary winding allows any desired level of (dc) collector current to flow, while the transformer core couples all variations in IC to RL via the secondary winding. This circuit is an emitter current bias circuit with voltage divider resistors R1 and R2 determining the transistor base voltage (VB), and resistor RE setting the emitter current level.

The circuit in Fig. 18-1 is referred to as a class-A amplifier, which is defined as one that has the Q-point (bias point) approximately at the center of the ac load line. This enables the circuit to produce maximum equal positive and negative changes in VCE.

The total dc load for transistor Q1 in the circuit in Fig. 18-1 is the sum of the emitter resistor (RE) and the transformer primary winding resistance (Rpy).

Consider the transformer illustrated in Fig. 18-2. N1 is the number of turns on the primary winding, and N2 is the number of secondary turns. The primary ac voltage and current are v1 and i1 and the secondary quantities are v2 and i2. The The (secondary) load resistance can be calculated as,

The ac load resistance measured at the transformer primary terminals (rL) is calculated as,

Substituting for v1 and i1 in the equation for rL, 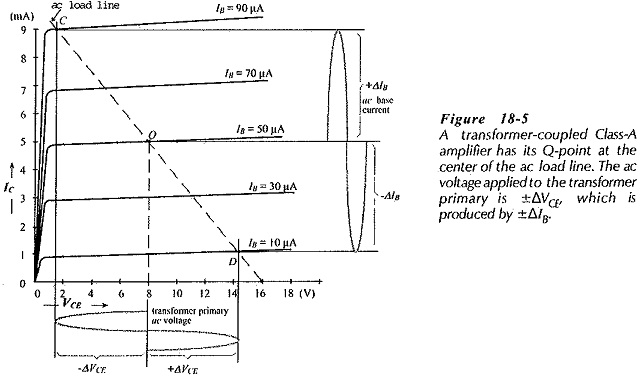 Note that, although VCC = 13 V, the transistor VCE can actually go to 16 V. This is due to the inductive effect of the transformer primary winding. The transistor used in this type of circuit should have a minimum breakdown voltage approximately equal to 2 VCC.

Efficiency of a Class A Amplifier: 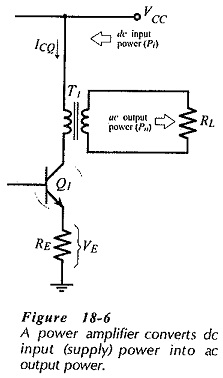 The do supply power is,

the case of a class A amplifier, Iave = ICQ.

Using the highest possible current and voltage levels, and assuming that the transformer is 100% efficient,

The maximum theoretical efficiency for a Class-A transformer-coupled power amplifier can now be determined as,

A typical transformer efficiency might be 80%. There is also power dissipation in the transistor emitter resistor and in the bias circuit. The practical maximum efficiency for a Class-A power amplifier is usually around 25%. This means, for example, that 4 W of dc supply power must be provided to deliver 1 W of ac output power to the load.