Transformer Coupled Class A Power Amplifier also sometimes referred to as single ended power amplifier. The term “single ended” (denoting only one transistor) is used to distinguish it from the push-pull amplifier using two transistors. In case of a direct coupled class A power amplifier, the quiescent current flows through the collector resistive load and causes large wastage of dc power in it. This dc power dissipated in the load resistor does not contribute to the useful ac output power. Furthermore, it is generally inadvisable to pass the dc through the output device such as in a voice coil of a loudspeaker. For these reasons an arrangement using a suitable transformer for coupling the load (say, a loudspeaker) to the amplifier is usually employed, as shown in Fig. 17.11. This Transformer Coupled Class A Power Amplifier arrangement enhances the conversion efficiency by a factor of 2 by eliminating the dc power dissipation in the load. Since the primary of the transformer has negligible dc resistance, there is negligible dc power lost at this point. The ac power is, however, coupled magnetically across the transformer into the load RL. This Transformer Coupled Class A Power Amplifier method also prevents a large dc current from flowing through the load, which otherwise could be harmful if the load were a loudspeaker, since it would cause saturation of the magnetic circuit and impair the reproduction of the audio signal. 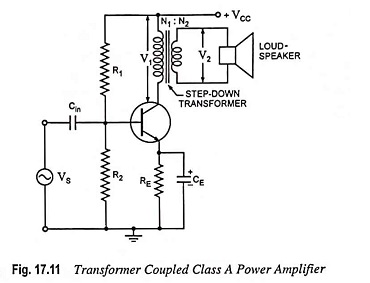 In a power amplifier circuit shown in Fig. 17.11, R1 and R2 provide potential divider biasing and emitter resistor RE is meant for bias stabilization. The emitter bypass capacitor CE is meant for preventing negative feedback in the emitter circuit. The input capacitor Cin couples ac signal voltage to the base of the transistor but blocks any dc from the previous stage. A step-down transformer of suitable turn ratio (a = N1/N2) is provided to couple the high impedance collector circuit to low impedance load. 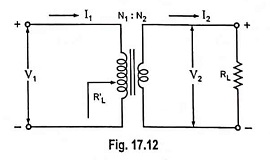 The power transferred from the power amplifier to the load (say a loudspeaker) will be maximum only if the amplifier output impedance equals the load impedance RL. This is in accordance with the maximum power transfer theorem. If we were not able to achieve the above condition, lesser power will be transferred to the load RL, though the amplifier is capable of delivering more power, and rest of power developed would be lost in the active device. Hence for transfer of maximum power from amplifier to the output device matching of amplifier output impedance with the impedance of output device is necessary. This is accomplished by using a step-down transformer of suitable turn ratio. The transformer impedance matching circuit is shown separately in Fig. 17.12, where R′L is the resistance looking into the primary of the transformer and is given as

In this circuit dc (winding) resistance determines the dc load line. Typically, this resistance is quite small (assumed to be zero) providing dc load to be a vertical line rising from VCC, as shown in Fig. 17.13. When an ac signal is applied to the base of the transistor the collector current will vary around the operating point Q. 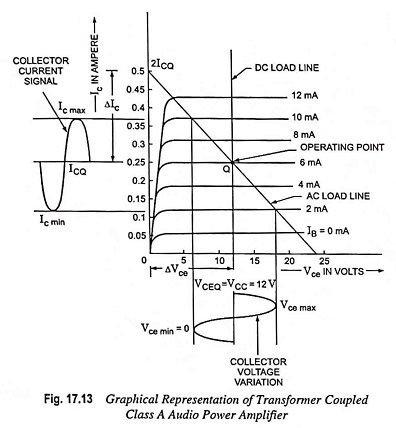 In order to have maximum ac power output, the peak value of collector current due to input ac signal alone should be equal to the zero signal collector current. To achieve this, the operating point Q is located at the centre of the load line. This is achieved by adjusting the biasing circuit (R1, R2 and RE).

In an ideal transformer, there is no voltage drop in primary so VCEQ = VCC and power input to the transistor becomes equal to the dc power drawn from the collector supply VCC as power lost in the primary is negligibly small.

Thus power input to the transistor,

Under condition of development of maximum ac power, voltage swings from Vce max to zero and collector current from Ic max to zero. So

AC power developed across the load,

Thus for a transformer coupled class A power amplifier the maximum theoretical efficiency is 50%. In practice, the efficiency of such an amplifier is somewhat less than 50%. It is about 30%.

The larger the value of Vce max and smaller the value of Vce min the closer the efficiency approaches the theoretical limit of 50%. Well-designed circuits can approach the limit of 50%. The larger the amount of power handled by the amplifier, the more critical the efficiency becomes. For a few watts of power a simpler, cheaper circuit with less than maximum efficiency is acceptable (and sometimes desirable). For power levels in the tens to hundreds of watts efficiency as close as possible to the theoretical maximum would be desired.

Since collector current flows at all times throughout the whole cycle, no part of the signal is cut off and thus the output waveform obtained in this case is exact replica of the input waveform. Thus such amplifiers have least distortion. However, they suffer from the drawbacks of (i) low output power and (ii) low collector efficiency (less than 50%; about 30%).

Thus, for a given transistor dissipation capability, the output ac power obtainable in a load is the same (i.e., ideally one half of the amount of power input to the transistor) no matter whether the load is direct coupled or transformer coupled. However, the drain on the power supply in a transformer coupled amplifier is ideally one half of what it is in the direct coupled amplifier.

From above Eq. (17.19) it is obvious that power dissipated by the transistor (Pd) is the difference of average dc power input from the collector supply battery, Pin (dc) (which is constant for a given battery and operating point) and ac output power, Pout (ac) supplied to the load. For zero output (i.e., when no signal is applied), the transistor is required to dissipate the maximum power i.e., Pd = VCC ICQ. This is the worst case for a transistor. When the signal is applied, the transistor has to dissipate less power. Hence in designing a power amplifier, the important factor that is to be kept in mind is the power dissipation rating of the transistor. 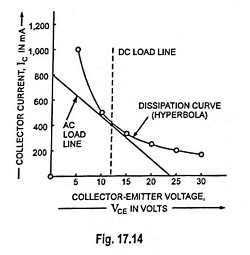 A single ended transformer coupled amplifier has the following drawbacks: 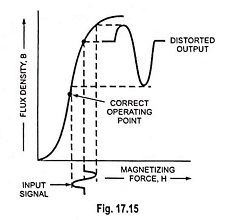