Construction and Working of Vacuum Pentode:

In order to retain the advantages of screen grid and eliminate the harmful effects of attracting the electrons due to secondary emission by the screen grid, an additional third grid, known as suppressor grid, may be inserted between the screen grid and the plate. The tube having five electrodes, a cathode, a control grid, a screen grid, a suppressor grid and a plate is known as pentode (penta means five). While eliminating the distortion of the plate characteristics, Vacuum Pentode retain all the advantages of tetrodes, such as low grid-to-plate capacitance, high amplification factor, and high power output. 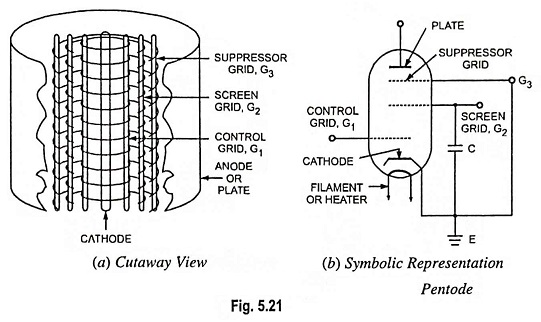 The constructional details of a typical pentode along with its symbolic representation are given in Fig. 5.21. As already mentioned the pentode consists of five electrodes namely a cathode, three grids and a plate. The grid closest to the cathode is the control grid, next is the screen grid, and the third is the suppres­sor grid. The suppressor grid is usually coarser than the control grid or even the screen grid mesh and is placed very close to the plate. It does not obstruct the flow of electrons from cathode to anode (or plate).

The screen grid cannot extend around the plate to shield, as in a tetrode, for this would be likely to reduce the effectiveness of suppressor grid. To keep the control grid-to-plate ca­pacitance small extra shields are provided either within the glass envelope or external to it. In the latter case the bulb is so shaped as to allow the shield to come very near to the plate.

A pentode, in comparison to a tetrode, permits greater swings of plate voltage without causing distortion. Therefore, the pentode has replaced the tetrode in almost all applications.

The pentode may be used as a