In the Townsend type of discharge in a gas described earlier, electrons get multiplied due to various ionization processes and an electron avalanche is formed. In a high Vacuum Breakdown, even if the electrodes are separated by, say, a few centimetres, an electron crosses the gap without encountering any collisions. Therefore, the current growth prior to breakdown cannot be due to the formation of electron avalanches. However, if a gas is liberated in the vacuum gap, then, breakdown can occur in the manner described by the Townsend process. Thus, the various Vacuum Breakdown mechanisms in high vacuum aim at establishing the way in which the liberation of gas can be brought about in a vacuum gap.

During the last 70 years or so, many different mechanisms for breakdown in vacuum have been proposed. These can be broadly divided into three categories

In this mechanism it is assumed that a charged particle would be emitted from one electrode under the action of the high electric field, and when it impinges on the other electrode, it liberates oppositely charged particles due to ionization of adsorbed gases. These particles are accelerated by the applied voltage back to the first electrode where they release more of the original type of particles. When this process becomes cumulative, a chain reaction occurs which leads to the Vacuum Breakdown of the gap.

The particle-exchange mechanism involves electrons, positive ions, photons and the absorbed gases at the electrode surfaces. Qualitatively, an electron present in the vacuum gap is accelerated towards the anode, and on impact releases A positive ions and C photons. These positive ions are accelerated towards the cathode, and on impact each positive ion liberates B electrons and each photon liberates D electrons. This is shown schematically in Fig. 2.22. The Vacuum Breakdown will occur if the coefficients of production of secondary electrons exceeds unity. Mathematically, the condition for breakdown can be written as

Later, Trump and Van de Graaff measured these coefficients and showed that they were too small for this process to take place. Accordingly, this theory was modified to allow for the presence of negative ions and the criterion for Vacuum Breakdown then becomes

where A and B are the same as before and E and F represent the coefficients for negative and positive ion liberation by positive and negative ions. It was experimentally found that the values of the product EF were close enough to unity for copper, aluminium and stainless steel electrodes to make this mechanism applicable at voltage above 250 kV. 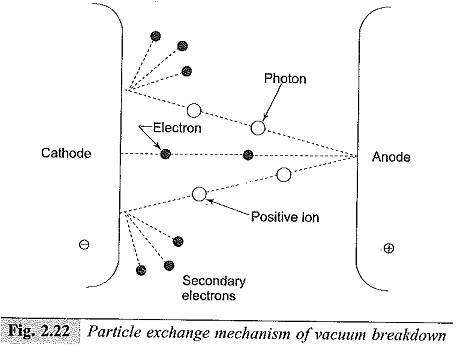 This theory postulates that electrons produced at small micro-projections on the cathode due to field emission bombard the anode causing a local rise in temperature and release gases and vapours into the vacuum gap. These electrons ionize the atoms of the gas and produce positive ions. These positive ions arrive at the cathode, increase the primary electron emission due to space charge formation and produce secondary electrons by bombarding the surface. The process continues until a sufficient number of electrons are produced to give rise to Vacuum Breakdown, as in the case of a low pressure Townsend type gas discharge. This is shown schematically in Fig. 2.23. 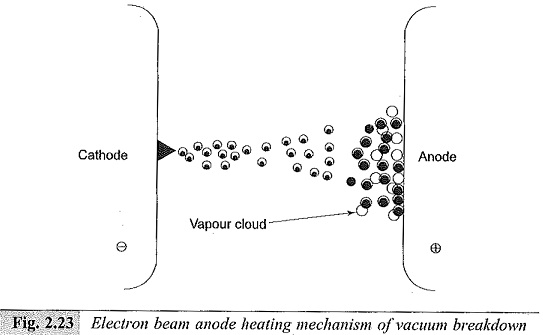 This mechanism postulates that near the breakdown voltages of the gap, sharp points on the cathode surface are responsible for the existence of the pre-breakdown current, which is generated according to the field emission process described below.

This current causes resistive heating at the tip of a point and when a critical current density is reached, the tip melts and explodes, thus initiating vacuum discharge. This mechanism is called field emission as shown schematically in Fig. 2.24. Thus, the initiation of Vacuum Breakdown depends on the conditions and the properties of the cathode surface. Experimental evidence shows that breakdown takes place by this process when the effective cathode electric field is of the order of 106 to 107 V/cm. 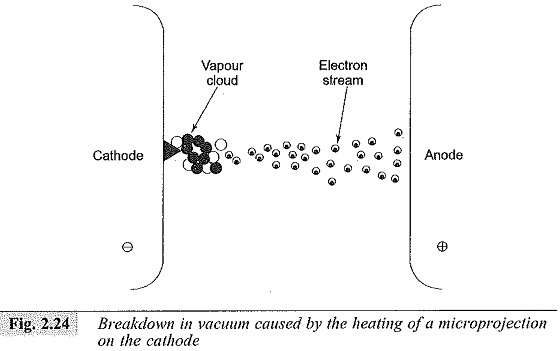 Basically this theory has been developed on the following assumptions (Fig. 2.25): 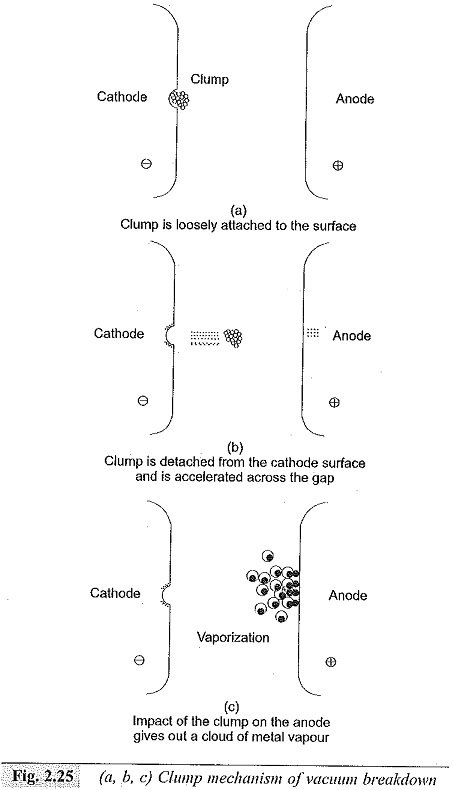 Cranberg was the first to propose this theory. He initially assumed that breakdown will occur when the energy per unit area, W, delivered to the target electrode by a clump exceeds a value C′, a constant, characteristic of a given pair of electrodes. The quantity W is the product of gap voltage (V) and the charge density on the clump. The latter is proportional to the electric field E at the electrode of origin. The criterion for Vacuum Breakdown, therefore, is

In case of parallel plane electrodes the field E = V/d, where d is the distance between the electrodes. So the generalized criterion for breakdown becomes

where C is another constant involving C′ and the electrode surface conditions.

Cranberg presented a summary of the experimental results which satisfied this breakdown criterion with reasonable accuracy. He stated that the origin of the clump was the cathode and obtained a value for the constant C as 60 x 1010 V2/cm (for iron particles). However the equation was later modified as V = CDα, where α varies between 0.2 and 1.2 depending on the gap length and the electrode material, with a maximum at 0.6. The dependence of V on the electrode material comes from the observations of markings on the electrode surfaces. Craters were observed on the anode and melted regions on the cathode or vice-versa after a single breakdown.

Dielectric strength of vacuum is defined in different ways. In the case of vacuum insulated switchgear, it is the value of the voltage to cause the first breakdown that is important. However, when the gap breaks down repeatedly, the breakdown voltage increases with the number of breakdowns until it reaches a steady or conditioned value. This value is often taken as the breakdown strength of the vacuum gap.

Although there has been a large amount of work done on Vacuum Breakdown phenomena, so far, no single theory has been able to explain all the available experimental measurements and observations. Since experimental evidence exists for all the postulated mechanisms, it appears that each mechanism would depend, to a great extent, on the conditions under which the experiments were performed. The most significant experimental factors which influence the breakdown mechanism are: gap length, geometry and material of the electrodes, surface uniformity and treatment of the surface, presence of extraneous particles and residual gas pressure in the vacuum gap. It was observed that the correct choice of electrode material, and the use of thin insulating coatings on electrodes in long gaps can increase the breakdown voltage of a vacuum gap. On the other hand, an increase of electrode area or the presence of particles in the vacuum gap will reduce the breakdown voltage.