In a single input balanced output differential amplifier an input signal is applied to either input, with the other input connected to ground. However, due to the common-emitter connection the input signal operates both transistors, resulting in output from both collectors. 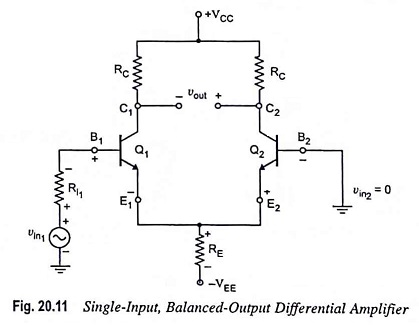 Single input balanced output differential amplifier is depicted in Fig. 20.11. In this circuit, an input signal is applied to the base of transistor Q1, with the other input connected to ground. Output is measured between the two collectors, which are at the same potential, and that is why the output is said to be balanced output.

Figure 20.12(a) depicts the ac equivalent circuit of this configuration with small signal T-equivalent models substituted for the transistors.

1. Voltage Gain: First of all let us discuss the important points about the circuit depicted in Fig. 20.12(a).

(iii) The output voltage vout is equal to the difference of voltages at the two collectors C1 and C2 i.e. vout = vC1 -vC2.

Usually Ri1/βac is negligibly small; therefore, neglecting it for simplicity, we have

Solving above equations for ie1 and ie2, we have

The input and output waveforms for this configuration are shown in Fig. 20.12 (b).

2. Differential Input Resistance: The input resistance Rin seen from the input signal source is given by expression