Figure 30.129 represents a basic sawtooth voltage generator. Switch S periodically changes its position from point 1 to point 2 (although a mechanical switch is shown in the circuit, the switching action is actually performed electronically by means of a separate circuit not shown here). The switching action causes the capacitor C to be alternately charged and discharged. 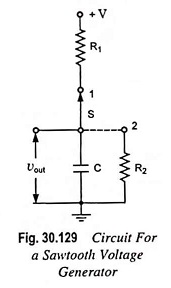 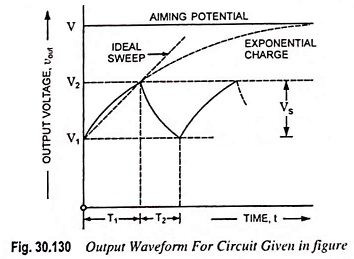 The sweep amplitude Vs is given as

The sweep linearity is a measure of how close to the ideal the exponential waveform comes. From Fig. 30.130 it is seen that for smaller values of V2, the straight line and exponential charges are nearly identical. In general, the sweep voltage should be a small fraction of the aiming potential or supply voltage if good linearity is to be achieved. 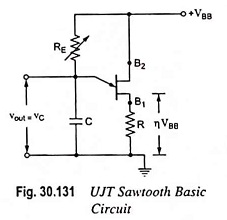 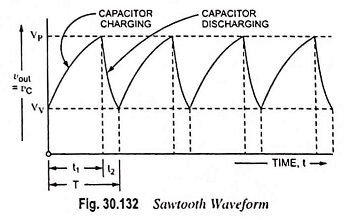 The frequency of the output sawtooth wave can he var­ied by varying the value of resistor RE as it controls the time constant (T = REC) of the capacitor charging circuit. The dis­charge time t2 is difficult to calculate because the UJT is in its negative resistance region and its resistance is continually chang­ing. However. t2 is normally very much less than t1 and can be neglected for approximation.

For satisfactory operation of the above oscillator, the following two conditions for the turn-on and turn-off of the UJT must be met.

i.e., the range of resistor RE should be as given below

The time period and, therefore, frequency of oscillation can be derived as below.

During charging of capacitor, the voltage across the capaci­tor is given as

The discharge of the capacitor commences at the end of charging period t1, when the voltage across the capacitor vC becomes equal to VP i.e., (η VBB + VB)

Neglecting VB in comparison to η VBB we have

Time period of the sawtooth wave,

and frequency of oscillation

Figure 30.133 shows another circuit for a sawtooth voltage generator. This sawtooth voltage generator circuit uses a four-layer diode as a switch. As soon as the capacitor voltage attains a specified value (10 V in this case), the diode breaks over and the latch closes. This discharges the capacitor, producing the flyback (sudden drop) of the capacitor voltage. At some point on the flyback, the current falls below the holding current, and the four-layer diode opens. 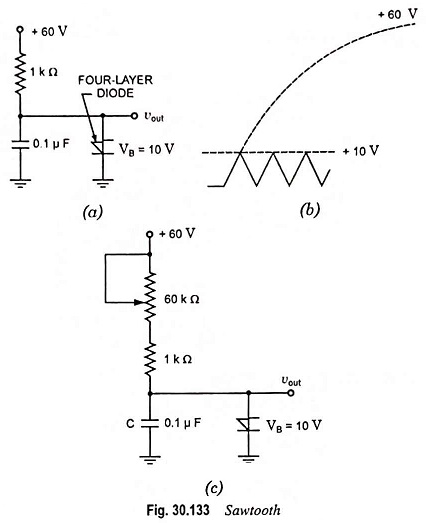 The next cycle then begins. Figure 30.133 (a) is an example of a relaxation oscillator, a circuit whose output depends on the charging and discharging of a capacitor, If RC time constant is increased, then the capacitor takes longer to charge to a specified voltage (10 V in this case) and the frequency of the sawtooth wave decreases. For instance, with the potentiometer shown in Fig. 30.133 (c) we get a 60 : 1 range in frequency.