When the surface of certain alkaline material such as sodium, potassium, cesium or rubidium is illuminated by a beam of light or ultraviolet radiations, the electrons are emitted. The phenomenon is called the photoelectric emission. The work function of the alkaline materials is very low and therefore, when energy of the light radiations (called photon) or the energy of the ultraviolet radiations (called quanta) fall on the alkaline material, gives sufficient energy to the free electrons of the material to speed up sufficiently to overcome the surface restraining forces of the metal and hence emission takes place. The electrons emitted in this way are called photoelectrons. The number of electrons emitted depends upon the intensity (brightness) of the light beam falling upon the emitter surface and the frequency of radiations. This property is very useful for the measurement of intensity of illumination.

In the photoelectric emission, the light supplies the work-function energy to free electrons from the surface. In this application, light or radiant energy may be thought of as in bundles according to the usual theories. The energy per bundle, is related to the frequency of the light by

The energy required to liberate an electron

Hence for a photon to cause emission

If the radiation is of wavelength greater than that given by the above Eq. (4.14), then photoemission will not occur at all.

The use of photoelectric emission phenomenon is made in phototubes which form the basis of TV and sound films. 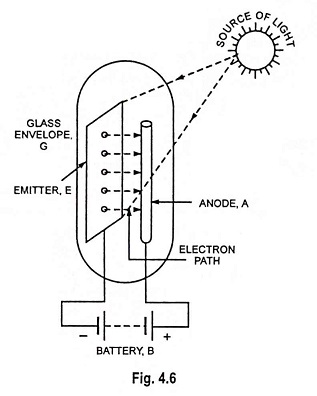 The phenomenon of photoelectric emission is illustrated in Fig. 4.6. The emitter E and anode A are enclosed in an evacuated glass envelope G. The anode is a thin metal rod and is held at positive potential w.r.t. emitter. When light of suitable intensity and frequency falls on the surface of the emitter, electrons are ejected from the emitter surface. These electrons are attracted by the positive anode to constitute current in the external circuit. The flow of current will exist so long as illumination is maintained.