Types of Amplitude Modulation (AM):

As we know already that, one carrier and two sidebands are produced in AM generation. However, it is not essential that all these signals are transmitted to enable the receiver to reconstruct the original signal. One may attenuate or altogether remove the carrier or any of the sidebands without affecting the communication process. Accordingly there are 3 types of Amplitude Modulation (AM) in suppressed component systems viz. namely 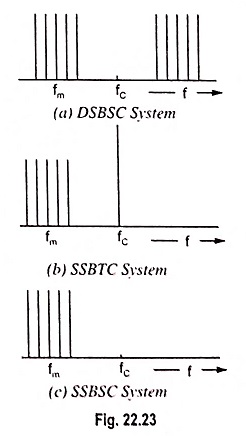 In this types of amplitude modulation in DSBSC system, as its name indicates, carrier component is altogether removed resulting in saving of enormous amount of power. From earlier discussion, it is known that carrier signal contains two-third of total transmitted power for 100% modulation. It is shown in Fig. 22.23 (a)

In this types of amplitude modulation in SSBTC system, one side-band is suppressed and the carrier and other sideband are transmitted, as shown in Fig. 22.23 (b). In this case one-sixth of total transmitted power is saved for 100% modulation.

The advantages of SSBSC (or SSB) system are given below:

Of course, the receiver for the SSB system gets complicated and the use of SSB system is, therefore, limited to radio tele­phony. The standard or double-sideband full-carrier (DSBFC) transmission system is widely used in broadcasting because of its relative simplicity of its modulating equipment.

There are various methods of suppressing carrier and one sideband. However, the carrier is suppressed always by employing some form of balanced modulator. For suppression of one sideband in SSB system, the following three methods are commonly employed.