Pulse Amplitude Modulation(PAM) is the simplest form of Pulse Modulation. It is shown in Fig. 18.7.

PAM is a pulse modulation system in which the signal is sampled at regular intervals, with each sample proportional to the amplitude of the signal at the instant of sampling. The pulses are then sent either by wire or cable, or else used to modulate a carrier. 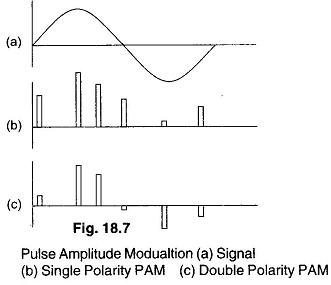 In single polarity PAM, a fixed dc level is added to the signal to ensure that the pulses are always positive.

It is very easy to generate and demodulate a PAM. In a generator, the signal to be converted to PAM is fed to one input of an AND gate. Pulses at the sampling frequency are applied to the other input of the AND gate, to open it during the wanted time intervals. The output of the gate then consists of pulses at the sampling rate, equal in amplitude to the signal voltage at each instant. The pulses are then passed through a pulse shaping network, which gives them a flat top.

Since FM is used in the receiver, the pulses are first recovered with a standard FM demodulator. They are then fed to an ordinary detector, which is followed by a low pass filter. If the cutoff frequencies of this filter are high enough to pass the highest signal frequency but low enough to remove the sample frequency ripple, an undistorted replica of the original signal is repro­duced.