The transistor construction consists of a silicon or germanium (preferably silicon because of its smaller cutoff current ICBO, smaller variations in ICBO due to variations in temperature and higher operating temperature) crystal in which a layer of N-type material is sandwiched between two layers of P-type material, as shown in Fig. 10.1 (a). 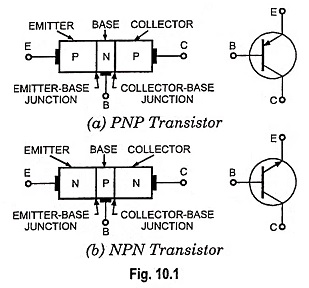 Alternatively a transistor construction may consist of a layer of P-type material sandwiched between two layers of N-type material, as shown in Fig. 10.1 (b).