What is Thermal Runaway and Heat Sink?

When the power dissipation at the collector-base junction of a transistor is small, as in case of a small-signal transistor, the surface area of the transistor case is normally large enough to allow all of the heat to escape. But for the large power dissipation that can occur in large power transistor the transistor surface area is not large enough and junction temperature may rise to a dangerous level. However, power handling capacity of a transistor can be increased by making suitable provision for rapid conduction of heat away from the transistor junction. This is achieved by using a sheet of metal called the heat sink which increases the area of contact with the atmosphere.

Heat sink is a direct practical means of combating the undesirable thermal effects e.g., thermal runaway. It may be noted that the ability of any heat sink to transfer heat to the surroundings depends upon its material, volume, area, shape, contact between case and sink and movement of air around the sink.

For achieving efficient heat dissipation heat sinks of different types are employed. A few of these are shown in Fig. 10.70. 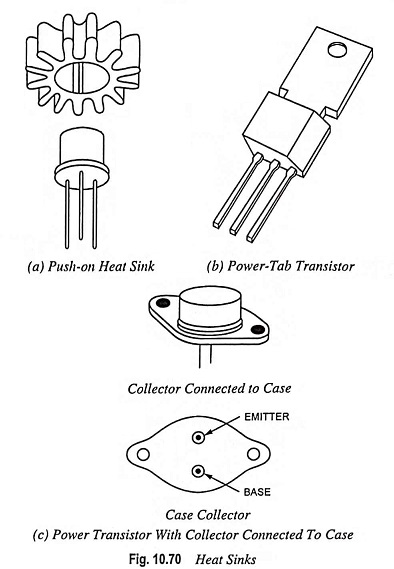 One type of heat sink, called the push-on heat sink, is shown in Fig. 10.70(a). When this is pushed on to the transistor case, heat radiates more quickly because of the increased surface area of the fins.

For maximum efficiency a heat sink (i) is kept in good thermal contact with the transistor case (ii) is made with the largest possible surface area (iii) is painted black and (iv) is mounted in such a position that free air can flow past it.

The noteworthy point here is that the use of heat sink may not be sufficient to avoid thermal runaway under all conditions. In designing a transistor circuit, consideration should also be given to the choice of (i) operating point (ii) ambient temperatures which are likely to be encountered and (iii) the type of transistor e.g., metal case transistors are more readily cooled by conduction than plastic ones. Circuits may be designed to compensate automatically for temperature variations and thus stabilize the operation of the transistor components.