Diode Clamping Circuit – A circuit that places either the +ve or -ve peak of a signal at a desired level is known as a clamping circuit. It simply adds or subtracts a dc component to the input signal. In steady state, the output waveform is an exact replica of the input waveform. The clamper is also referred to as a dc restorer and a (signal) level shifter.

The necessity to establish the extremity of the positive or negative signal excursion at some reference level (i.e., to introduce a dc component to the input signal) arises in connection with a signal that has passed through a capacitive coupling network and lost its dc component, as in case of television receivers. However, normally the dc component introduced is not identical with the dc component lost in transmission. 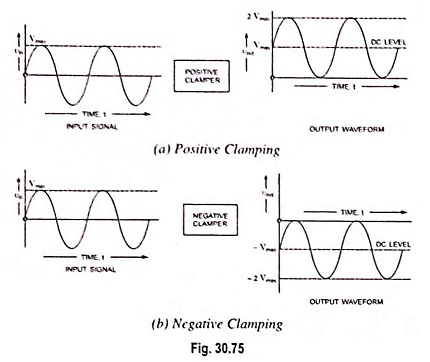 For a clamping circuit at least three components—a diode, a capacitor and a resistor are required. Sometimes an independent dc supply is also required to cause an additional shift.

The important points regarding diode clamping circuits are:

It is advantageous to first consider the condition under which the diode becomes forward biased.

Diode Clamping circuits are often employed in television receiv­ers as dc restorers. The incoming composite video signal is nor­mally processed through capacitively coupled amplifiers which eliminate the dc component thereby losing the black and white reference levels and the blanking level. These reference levels have to be restored before applying the video signal to the picture tube. This is accomplished by employing clamping circuits. Diode Clamping circuits are also used in storage counter, analog frequency meter, capacitance meter, divider and staircase waveform generator.

Consider a negative clamping circuit, a circuit that shifts the original signal in a vertical downward direction, shown in Fig. 30.76. With the positive input, the diode D is forward biased and capacitor C is charged with the polarity shown. During the positive half cycle of input, the output voltage is equal to barrier potential of the diode, V0 and the capacitor is charged to (V – V0). When the input goes negative, the diode is reverse biased and acts as an open circuit and thus has no effect on the capacitor voltage. R being of very high value cannot discharge C by very much during the -ve portion of the input waveform. Thus during negative input, the output voltage being the sum of the input voltage and the capacitor voltage is equal to – V – (V – V0) or – (2 V – V0). Thus peak-to-peak output being the difference of the negative and positive peak voltage levels is equal to V0 – [- (2 V – V0)] or 2 V. 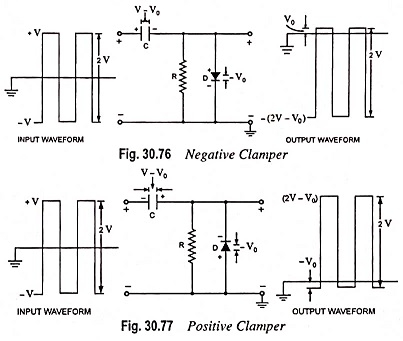 To remember which way the dc level of a signal moves, look at Fig. 30.76. Notice that the diode arrow points downward, the same direction as the dc shift. Similarly in Fig. 30.77, the diode arrow points upward, again the same direction as the dc shifts. It means that, when the diode points upward, we have a positive dc clamper and when the diode points downward, the circuit is a negative dc clamper.