Negative Feedback Amplifier Circuit – A two-stage, capacitor-coupled BJT amplifier is shown in Fig. 13­-10. This is the same Two Stage CE Amplifier circuit discussed already with the addition of feedback components RF2, RF1, and CF1. The output voltage is divided across RF2 and RF1 to produce a feedback voltage in series with the signal at the base of Q1. 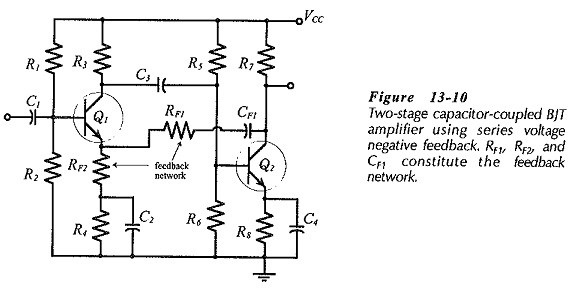 CF1 (in Fig. 13-10) is a dc blocking capacitor to prevent the dc voltage at Q2 collector from affecting the Q1 bias conditions. CF1 behaves as an open-circuit to do and a short-circuit to ac. Consequently, CF1 is not included in the mid-frequency no equivalent circuit of the feedback network in Fig. 13-11. Capacitor C2 behaves as a short-circuit at middle and higher frequencies, so C2 and R4 (shorted by C2) are also absent from the mid-frequency no equivalent circuit. 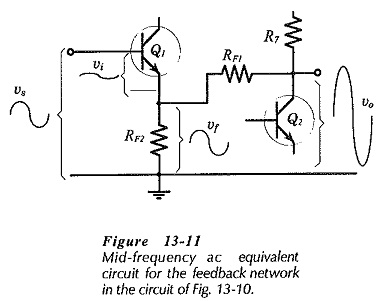 From previous topics of a Two Stage CE Amplifier, it is known that the circuit output voltage is in phase with the signal voltage. When the instantaneous level of vs is positive-going, vo is also positive-going, and consequently vf is in phase-opposition with vs. When vs goes up (positively), vf also goes up, and consequently, the voltage (vi) at the base-emitter of Q1 is reduced from vs to,

Note that the Q1 bias resistors (R1 and R2) in Fig. 13-10 are outside the feedback loop, and are unaffected by feedback. The impedance looking-into the transistor base is within the feedback loop, so it is altered by feedback. Also, recall that the Q2 collector resistor (R7) is unaffected by negative feedback, and that the impedance looking-into the transistor collector terminal is changed by negative feedback.

A Two Stage CE Amplifier using Series Voltage Negative Feedback amplifier like the one shown in Fig. 13-12, is best designed first as an amplifier without feedback. The feedback component values are then determined, and the circuit is modified as necessary. 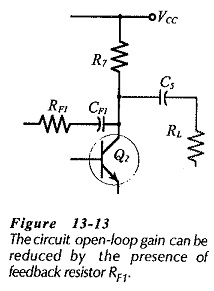 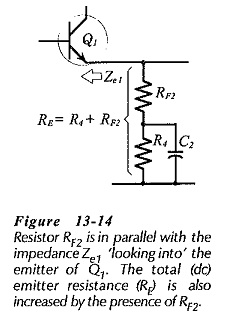 Another consideration for RF2 is that it is in parallel with the impedance (Ze1) at the emitter of Q1, (see Fig. 13-14). Without negative feedback, Ze1 would usually equal the transistor hib, value, which is typically 26 Ω when IC = 1 mA. With negative feedback, Ze1 can be shown to range from about 2.5 kΩ to 30 kΩ depending upon Av and B. Resistor RF2 should be selected much smaller than Ze1. However, RF2 should be as large as possible to give the largest possible value for RF1; (from Eq. 13-10, RF1 ≈ ACL X RF2).

A reasonable starting point for feedback network design is to select RF2 much lower than Ze1/10: in the range of 100 Ω to 470 Ω. RF2 could also alter the dc bias conditions for Q1. Consequently, it might be necessary to reduce R4, so that R4 and RF2 add up to the original resistance selected for R4 (or RE), (see Fig. 13-14).

As already mentioned, XCF1 must be very much smaller than RF1 at the low cutoff frequency for the amplifier. It can be shown that, if XCF1 = RF1 at f1, the closed-loop gain would actually increase at frequencies below f1. CF1 is normally calculated from,

The emitter bypass capacitor C4 (in Fig. 13-12) was calculated to have XC4 = 0.65 hib2  at f1. So, XC4 will reduce the circuit open-loop gain (Av) at f1. However, even with this gain reduction. Av should still be much larger than ACL, so C4 can normally be left as calculated for an amplifier without feedback.

Recall from earlier discussion that, when designing an amplifier without feedback, the collector resistor (RC2) for the output transistor is usually selected as equal to, or less than, RL/10. This is because without negative feedback Zo ≈ RC2. Negative feedback normally reduces Zo to a value much smaller than RC2. So, RC2 does not have to be selected as RL/10 when designing a Two Stage CE Amplifier using Series Voltage Negative Feedback. Instead, any convenient level of VRC and IC can be used for calculating a suitable RC2 value.