For a function to be positive real function it has to satisfy the following basic properties,

The function F(s) is positive real function having following properties,

1. The coefficients of the numerator and denominator polynomials N(s) and D(s) in F(s) are real and positive.

2. The poles and zeros of F(s) are having negative or zero real parts.

3. The poles of F(s) on the imaginary (jω) axis must be simple. Their residues must be real and positive. The same statement is true for the poles of 1/F(s).

5. The terms of lowest degree in the numerator and denominator polynomials of F(s) differ in degree at most by 1. So F(s) has neither multiple poles nor zeros at the origin.

These properties are nothing but necessary conditions for the given function to be positive real but are not sufficient conditions.

Procedure for Testing a Function for Positive Realness:

The testing procedure can be divided as,

By inspecting the given function, the following requirements are tested,

Test for Necessary and Sufficient Conditions:

The tests for necessary and sufficient conditions are,

The real part of F (jω) must be greater than equal to zero for all ω.

To test this, separate the numerator and denominator polynomials into even and odd parts.

It is known that,

Also m1 n2 and m2 n1 is odd as the product of even and odd function.

Hence in the above equation of F(s), first part is even while the second part is odd. 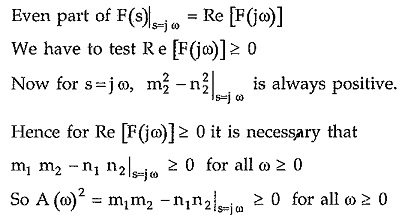 In most of the cases, the condition can be verified by factorising A (ω2). If factorization is not sufficient for the required conclusion then A (ω2) is plotted over sufficiently large range of ω and it is ensured that it is not negative.

Thus the testing procedure for positive realness of a function can be summarized as,

1. Check all the necessary conditions by inspection.

2. For all the poles and zeros of F(s) to be in the left half of s-plane or on the imaginary axis, N(s) and D(s) polynomials must be Hurwitz.

3. If F(s) has poles on imaginary axis, the residues at the poles must be real and positive.

Find the partial fractions of F(s) where s = ± jω0 is the pair of poles on imaginary axis.

So coefficients k and k· which are complex conjugates of each other must be real and positive.

This can be done by factorising A (ω2). This also can be tested by plotting A (ω2) graph against ω2 or using Sturm’s theorem.