While a Controller Transfer Function is designed to improve the behavior of a given control system in practice it is very difficult to realize such a controller because of the availability of components. The actual time constant of the controller may deviate from the theoretically designed value. Also the operating conditions may cause a change in plant time constants or even controller time constants. Thus the performance of the system may deviate from the desired or expected one. This incorrect matching may cause differences in the dynamic performance also.. 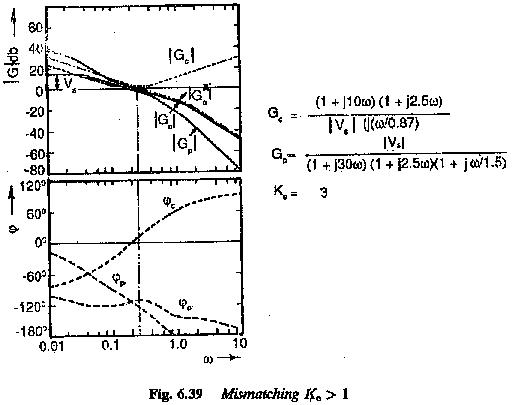 The open loop transfer function of the system is

Using the ratio K0 = T0/Te this can be written as

From Eq. 6.117 it can be seen that the ratio K0 (ratio of integration time of the controller to the uncompensated time constant of the plant) is effectively multiplied by the factor Ke. Thus the change in the time constant is equivalent to a change in this ratio. 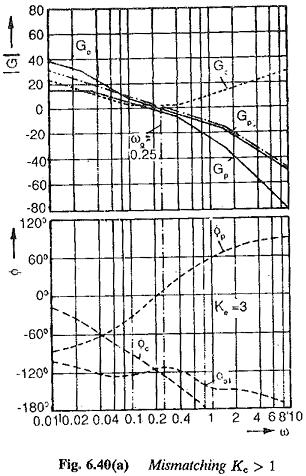 A typical time response of the resulting second order system for Ke > 1 is shown in Fig, 6.40(b). For comparison the time response for Ke = 1, is also shown in the figure.

Case (ii) Ke < 1: For this case of Ke < 1 the time constant of the plant decreases by the factor Ke. In this case the situation is different and it is equivalent to decrease in K0 and hence in the integration time of the Controller Transfer Function. The effect of this on Bode plots shown in Fig. 6.41(a) can be seen to be the following:

A typical time response for this case is depicted in Fig. 6.41(b). 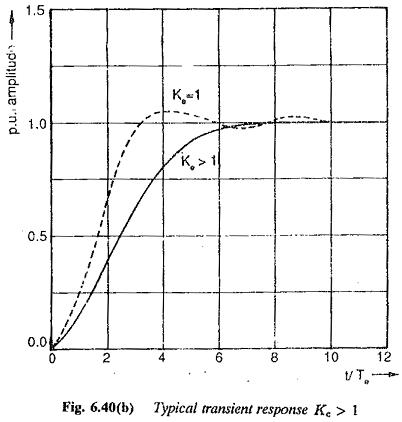 Therefore the system may have its damping increased or decreased, depending upon whether the compensated time constants increase or decrease in the operation, causing an incorrect matching of the plant with the Controller Transfer Function. From the time responses shown in Figs 6.40(b) and 6.41(b) a deviation of Ke in the range 0.5 < Ke < 2.0 can be allowed. 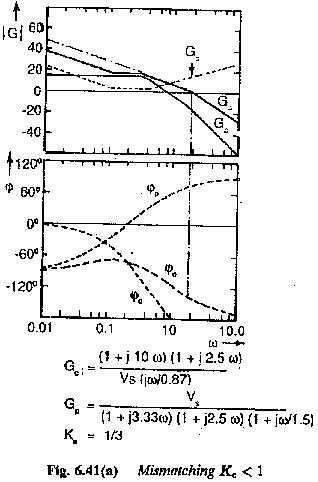 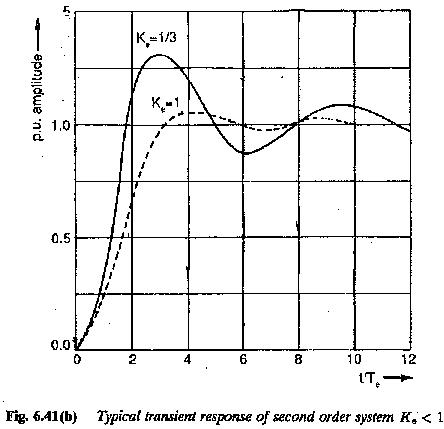 By the same argument that the frequencies of interest are such that ωTp1≫1 the correction factor (1+jωKcTp1)/(1+jωTp1) can be replaced by Ke. Therefore

The open loop transfer function of the system is

Thus the change in the time constant of the Controller Transfer Function may be studied by an equivalent change in the value of K0.

A study shows that the effect of reduction in the controller time constant has the same effect as an increase in plant time constant.

Case (i) Kf < I This case is equivalent to causing an increase in K0 or increase in the integration time of the Controller Transfer Function. The effects that follow are the same those caused for Ke > 1. The gain cross-over frequency decreases and phase margin increases. The damping (d=√K0/2) increases. The peak overshoot decreases if the system is still under damped. There is a possibility for the system to become over damped (Fig. 6.42). 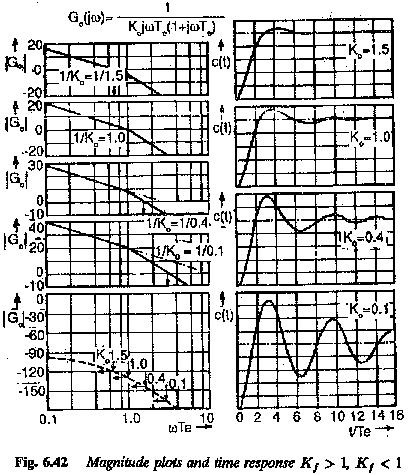 Case (ii) Kf > 1: The effect is equivalent to a decrease in the integration time. The effects for the case are the same as those caused for  Ke < 1, viz., the gain cross-over frequency increases, phase margin decreases, the damping decreases causing an increase in peak overshoot. The magnitude plots and time responses are shown in Fig. 6.43 for different values of K0. These responses confirm the above conclusions. A very low value of K0 results in a very lightly damped system. Allowable variation K0 is in the range 1 — 1.5(d = 0.5).

From the above discussion it is clear that the effect of incorrect matching due to increase in the time constants compensated is the same as those due to decrease in the compensating constant of the controller.