Poles and Zeros of Transfer Function:

Poles and Zeros of Transfer Function defines that, in general, the network function N(s) may be written as

where a0,a1,…a2 and b0,b1,…bm are the coefficients of the polynomials P(s) and Q(s); they are real and positive for a passive network. If the numerator and denominator of polynomial N(s) are factorized, the network function can be written as

and a0/b0 = H is a constant called the scale factor. 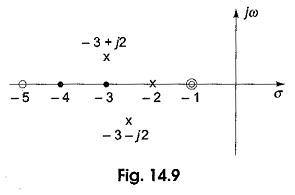