In an ac system it is possible to connect two or more number of individual circuits to a common polyphase source. Though it is possible to have any number of sources in a polyphase system, the increase in the available power is not significant beyond the three-phase system. The power generated by the same machine increases 41.4 per cent from single phase to two-phase, and the increase in the power is 50 per cent from single phase to three-phase. Beyond three-phase, the maximum possible increase is only seven per cent, but the complications are many. So, an increase beyond three-phase does not justify the extra complications.

In view of this, it is only in exceptional-cases where more than three phases are used. Circuits supplied by six, twelve and more phases are used in high power radio transmitter stations. Two-phase systems are used to supply two-phase servo motors in feedback control systems. 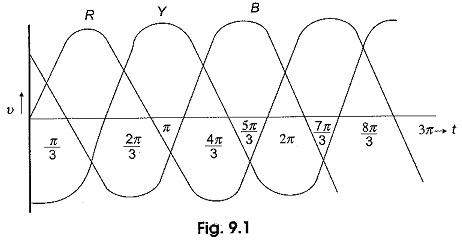 It is observed that the Polyphase System, especially three-phase, system has many_ advantages over the single phase system, both from the utility point of view as well as from the consumer point of view. Some of the advantages are as under.

In general, we can conclude that the operating characteristics of a three-phase apparatus are superior than those of a similar single phase apparatus. All three-phase machines are superior in performance. Their control equipment’s are smaller, cheaper, lighter in weight and more efficient. Therefore, the study of three phase circuits is of great importance.