What is Crossover Distortion and how to eliminate it?

In addition to the distortion introduced due to the nonlinearity of the collector characteristics and due to non-matching of the two transistors, there is one more source of distortion, that is caused by nonlinearity of the input characteristic. Recall that silicon transistors must have at least 0.5 V to 0.6 V of forward base-emitter bias before they will go into conduction. Since in class B push-pull amplifiers the forward bias is produced by the input signal, both of the transistors will be non-conducting (or off), when the input signal is approximately ± 0.5 V. This forms a “dead band” in the input and produces crossover distortion in the output. 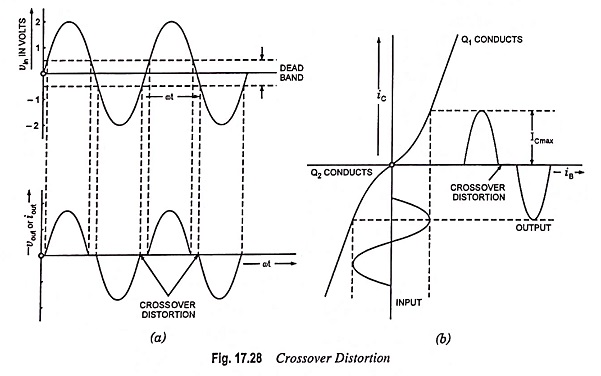 To eliminate crossover distortion, it is necessary to add a small amount of forward bias to take the transistors to the average of conduction or slightly beyond. This does slightly lowers the efficiency of the circuit and there is a waste of standby power, but it alleviates the crossover distortion problem.

Technically the operation of transistors lies between class B and class A mode. Therefore, the circuit operation is often referred to as being class AB operation.