One of the methods of Nonlinear Distortion Measurements consists of simulta­neously applying two sinusoidal voltages of different frequencies to the amplifier input and observing the sum, difference and various combination frequencies that are produced by the non-linearity of the amplifier. This method of Nonlinear Distortion Measurements is called the intermodulation method.

The two signals may be combined under many different conditions, but two cases are important. 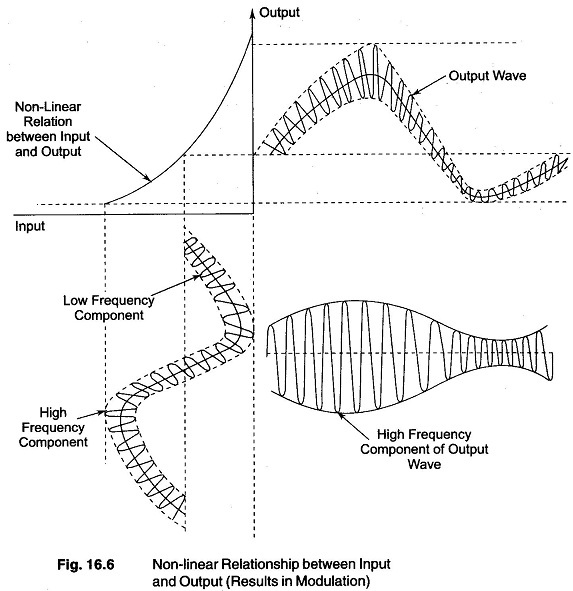 Hence the signal of frequency f2 in the amplifier output is modulated at the low frequency f1. The amount of distortion is then expressed in terms of the modulation experienced by the high frequency wave, according to the relation

m2 = corresponding modulation of f2 at a frequency 2f1.

This particular method of employing two signals to determine Nonlinear Distortion Measurements is widely used in AF systems. It is commonly referred to as the SMPTE intermodulation method, since it has been standardised by the Society of Motion Pictures and Television Engineers (SMPTE).

(An alternative method of explaining this situation is to consider that the non-linear action of the amplifier produces sum and difference frequencies, (f1 + f2) and (f1 — f2) respectively. These frequency components, together with f2, can be thought of as representing the side bands and a carrier respectively, thus forming a wave of carrier frequency f2 modulated at frequency f1. If the Nonlinear Distortion Measurements is also sufficient to produce second order combination frequencies f2 + 2f1, the modulation envelope then contains a component that is the second harmonic of f1. The modulation envelope is then not sinusoidal.)

The block diagram for the setup of determining intermodulation by the SMPTE method is shown in Fig. 16.7. 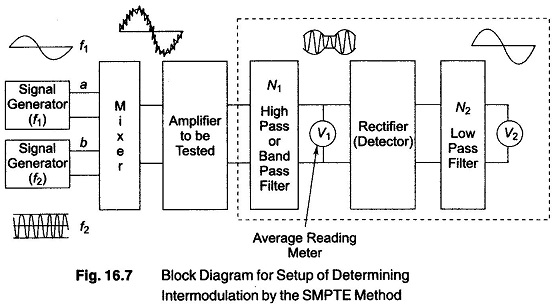 The system consists of two signal generators, generating frequencies f1 and f2 respectively, and combining these two outputs from the signal generators. The combining systems may take any of a number of forms, such as a transformer with centre tapped primary, or two amplifier active devices with separate inputs but common output load impedance. (Alternatively, it is possible to use a two frequency signal generator specially designed for intermodulation test.)

The network N1 separates the high frequency (f2) and its side bands from other frequency components that may be present in the amplifier output. Voltmeter V1 measure the amplitude of the resulting modulated wave, i.e. it measures the carrier amplitude E2.

The modulation envelope is determined by rectifying (detecting) the modulation wave, separating the modulation frequency component of the envelope by a low pass filter N2, and determining the amplitude of the modulation component by voltmeter V2. The dotted block indicates a system for measuring the characteristics of a modulated wave. Calibration can be carried out by applying known voltages of frequencies f1 and f2 to terminals a and b.

The voltmeter V1 used must be an average-reading type and voltmeter V2 must be a square law device. An average reading meter, such as a copper oxide rectifier instrument gives sufficiently accurate results for ordinary require­ments. In no case should voltmeter V2 be a peak reading meter.