The actual voltage E on the line at any point is the sum (Ei + Er) of the voltage of the incident and reflected waves at the point. This results in a voltage distribution on the line, such as illustrated in Fig. 20.8, called a standing wave pattern. 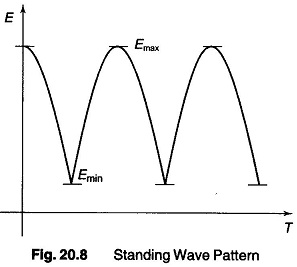 The distance between adjacent minima (or maxima) is exactly half the line wavelength.

If the line has no attenuation, the standing wave ratio, S, is the same everywhere. (If the line has losses, S decreases with increasing distance from the load.)

Directional couplers serve as stable, accurate and relatively broad band coupling devices, which can be inserted into a transmission line to measure either incident or reflected power.

The usefulness of a directional coupler in power measurement arises from the fact that in RF transmission systems each wave on the system can be considered as transmitting power in the direction in which the wave travels.

The power represented by the induced wave in the directional coupler is a definite function of the power associated with the corresponding wave on the primary system. The ratio of the induced power to total power is termed as coupling, and is commonly expressed in decibels.

In Fig. 20.9(a) the primary system is a co-axial line, and the secondary system consists of two co-axial lines A and B, interconnected by a loop D that projects into the primary line and is subjected to the simultaneous influence of the electric and magnetic fields that exist in it.

Consider now the case of a wave travelling towards the right on the primary system. The electric field of this wave induces a charge on the loop D that produces waves in both parts A and B of the secondary systems.

The equivalent circuit that describes this action is illustrated in Fig. 20.9(b) and consists of a voltage E1 that is applied to co-axial systems A and B in parallel through series capacitance C1, producing currents as indicated by the arrows.

The loop D links with the magnetic flux from the wave in the primary line, and therefore has a voltage E2 induced in series with it, as illustrated in Fig. 20.9(c).

This series voltage gives rise to waves in parts A and B of the secondary system, which are characterised by currents flowing in the direction indicated by the arrows.

The two waves in section A, produced by magnetic and electrostatic coupling respectively, are of the same polarity and hence add, while the two waves produced in section B are of opposite polarity, and so tend to cancel each other.

With a wave travelling on the right in the primary line, the net effect is to produce only one resultant wave in the secondary system, which travels in the direction of A. By terminating section A of the secondary system in its characteristic impedance, this induced wave is absorbed. (If a voltmeter is connected across it, it will read voltage V1.)

The relative magnitude of electric and magnetic coupling in Fig. 20.9(b) can be readily controlled by, the design of the coupling loop D. The electric coupling depends on the amount of electric field that terminates on the loop, and is hence determined by the length of the loop and the diameter of the conductor.

The component waves induced in A and B by the electric and magnetic fields in the primary co-axial line will again be equal to each other, since their magnitudes are not affected by the direction of travel on the primary line.

Accordingly, the two waves induced in A now cancel each other, while the two waves produced in B add. Hence, a wave travelling to the left in the primary line produces no effect in section A, but does produce an induced wave in section B. By terminating B of the secondary system in its characteristics impedance, this induced wave is absorbed. (Also, if a voltmeter is connected across it, voltage V2 is obtained.)

Directional couplers are extensively used for monitoring and measuring power in microwave systems.

In particular, radar transmitters have built in directional couplers for monitoring power. They are also used in the determination of reflection coefficients.

Two similar directional couplers can be used to measure the net power delivered to a load if arrangements are made such that one coupler samples the incident power and the other coupler extracts the same fraction of the reflected power. The difference in the power outputs of the two couplers then gives a measure of the load power. The reflection coefficient can be determined as

where S is the standing wave ratio given by

By terminating both A and B in well matched thermocouple elements, so that their opposed output is read on a micro ammeter, a wide band type of wattmeter can be realized for measuring the power in an arbitrary load.