Transmission lines are composed of parallel conductors which, for all practical purposes, can be considered as infinitely long. Let us first develop expressions for flux linkages of a long isolated Current Carrying Conductor with return path lying at infinity. This system forms a single-turn circuit, flux linking which is in the form of circular lines concentric to the conductor. The total flux can be divided into two parts, that which is internal to the conductor and the flux external to the conductor. Such a division is helpful as the internal flux progressively links a smaller amount of current as we proceed inwards towards the centre of the conductor, while the external flux always links the total current inside the conductor.

Flux Linkages due to Internal Flux:

Figure 2.1 shows the cross-sectional view of a long cylindrical Current Carrying Conductor I. 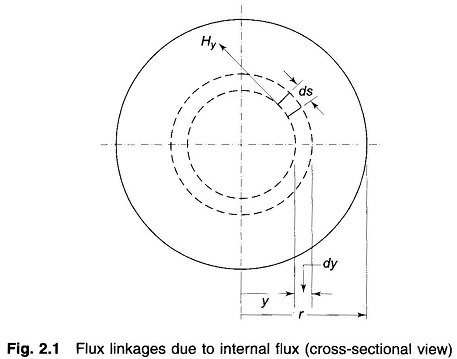 By symmetry, Hy is constant and is in direction of ds all along the circular path. Therefore, from Eq. (2.8) we have

The flux density By, y metres from the centre of the conductors is

where μ is the permeability of the conductor.

Consider now an infinitesimal tubular element of thickness dy and length one metre. The flux in the tubular element dΦ = By dy webers links the fractional turn (Iy/I = y2/r2) resulting in flux linkages of

Integrating, we get the total internal flux linkages as

Flux Linkage due to Flux Between Two Points External to Conductor: 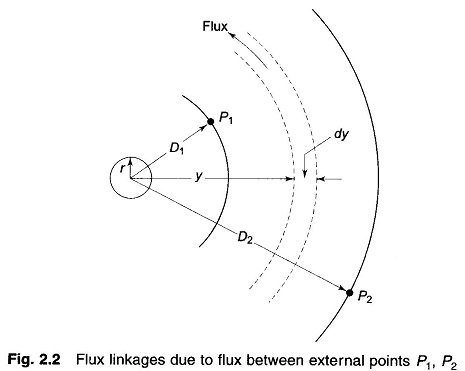 Magnetic field intensity at distance y from the conductor is

The flux dΦ being external to the conductor links all the Current Carrying Conductor which together with the return conductor at infinity forms a single return, such that its flux linkages are given by

Therefore, the total flux linkages of the conductor due to flux between points P1 and P2 is

where In stands for natural logarithm.

Flux Linkages due to Flux up to an External Point:

Here r’ can he regarded as the radius of a fictitious conductor with no internal inductance but the same total inductance as the actual conductor.