(I) Annual charge on capital outlay. This is on account of interest and depreciation on the capital cost of complete installation of transmission line. In case of overhead system, it will he the annual interest and depreciation on the capital cost of conductors, supports and insulators and the cost of their erection. Now, for an overhead line, insulator cost is constant, the conductor cost is proportional to the area of X-section and the cost of supports and their erection is partly constant and partly proportional to area of X-section of the Conductor Size. Therefore, annual charge on an overhead’ transmission line can be expressed as :

where P1 and P2 are constants and a is the area of X-section of the conductor.

where P3 is a constant.

In exp. (iii), only area of X-section a is variable. Therefore, the total annual cost of transmission line will be minimum if differentiation of C w.r.t. a is zero i.e. 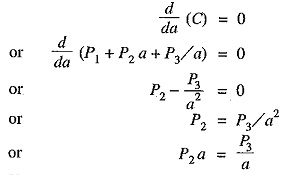 Therefore Kelvin’s Law can also be stated in an another way i.e. the most economical area of conductor is that for which the variable part of annual charge is equal to the cost of energy losses 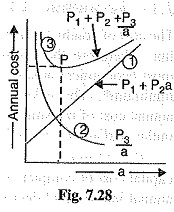 Limitations of Kelvin’s law. Although theoretically Kelvin’s law holds good, there is often considerable difficulty in applying it to a proposed scheme of power transmission. In practice, the limitations of this law are :