What is Comparator in Electronics? – Classification and Applications

A circuit used to mark the instant when an arbitrary waveform attains some particular reference level is called a comparator. The clipping circuits can also be used to perform the operation of comparison. In this case the circuits become elements of a comparison system. The only difference between the two is that, in a clipping circuit, part of the signal is required to be reproduced without any distortion, whereas in a comparator in electronics circuit we have no interest in reproducing any part of the signal waveform. 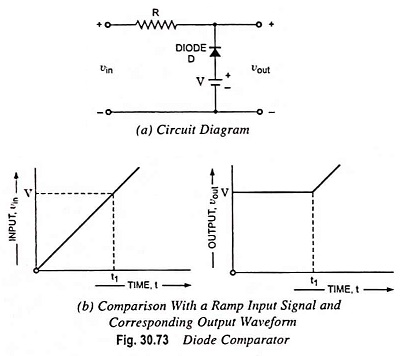 The diode comparator circuit given in Fig. 30.73 is not complete by itself. When the input signal rises past the battery voltage V (reference level), the output voltage will depart from V, this change being applied to the device which is to be actuated. The precise moment at which the device will respond will he governed by its own characteristics. It is convenient to restrain the signal from reaching the actuated device just prior to the moment of comparison. It is also convenient to remove the signal after the comparison operation has been completed. A signal appropriate for this purpose can be generated by double differentiation of the output signal from the circuit given in Fig. 30.74. 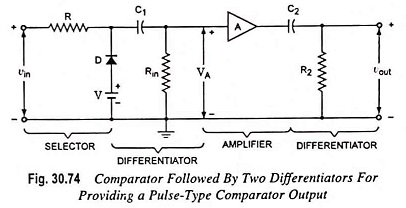 The amplifier is employed to prevent the second differentiator from loading the first one and also serves to increase the amplitude of the output to a convenient level.

These are used in electronic systems such as: