Classification of Printers – Character printers and graphic plotters are the two devices used to prepare a permanent (or hard copy) record of computer output.

The basic difference between printers and plotters is that the former are de­vices whose purpose is to print letters, numbers and similar characters in text-readable form, while the latter print diagrams with continuous lines.

Classification of Printers in computers are divided into below categories.

In this Classification of Printers, Non-impact printers form characters without engaging the print mechanism with the print surface, e.g. by heating sensitized paper or by spraying ink from a jet.

Dot matrix characters are shaped by combinations of dots that form a group representing a letter or number when viewed together.

3. Character at a Time and Line at a Time Printer

(Some advanced printers, e.g. those using lasers and xerographic methods, print lines so rapidly that they virtually print a page at a time, and are therefore called page printers. They are rarely used in mini computers and microcompu­ters, for special purposes like phototype setting.)

The 96 ASCII character set includes the lower case English alphabet and several additional special symbols. Of the 96 characters, ‘space’ and ‘delete’ do not print, leaving only 94 printable characters.

The typewriter is the classic example of this printer, with characters fully formed because they are embossed on each type bar.

Ordinary type bar typewriters cannot be used with computers, because they lack a computer coding interface for easy communications. 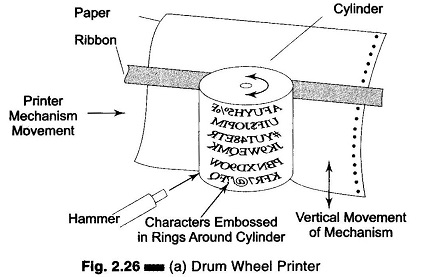 (The classic printer used with mini and micro computers in the past was the Teletype Model 33 printer. The ready availability and low cost of these print­ers, plus their relatively easy interfacing, made them natural for use in small computers. The model 33 prints at a rate of 10 characters per second which is slow compared to today’s printer of 55 characters per second for similar print­ers.) The print mechanism is a vertical cylinder. Characters are embossed in several rows and columns around the cylinder, as shown in Fig. 2.26 (a).

These Classification of Printers are interfaced with small computers by a 20 — 60 mA current used to transmit ASCII coded bits serially. 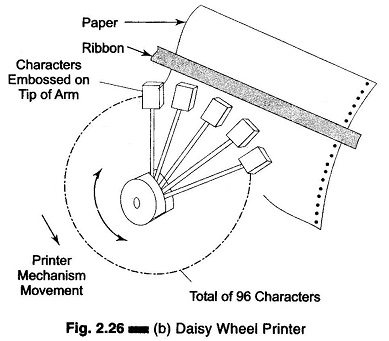 Another type of fully formed character printer, designed for computer use, has characters mounted on the periphery of a spinning print head, known as a daisy wheel printer, and is shown in Fig. 2.26 (b).

To print a letter, the wheel is rotated until the desired letter is in position over the paper. A solenoid driven hammer then hits the petal against the ribbon to print the letter.

Daisy wheel printers are slow, with a speed of about 50 characters per sec­ond (cps). The advantage of the daisy wheel mechanism is high print quality, and interchangeable fonts.

Character at a time printing follows the following sequence of steps; left to right printing to the end of the line, stop, return carriage and start a second line, and again print left to right. It is unidirectional.

Spinning wheel printers are capable of bidirectional printing. The second line is stored in a buffer memory within the printer control circuitry and can be printed in either direction, depending on which takes the least printer time.

In line printers, characters or spaces constituting printable lines (typically 132 character positions wide) are printed simultaneously across the entire line. Paper is spaced up and the next line is printed. Speeds for line printers range from several hundreds to thousands of lines per minute.

This Classification of Printers are used for high volumes of printed output and less frequently in micro computers, because of their high equipment cost relative to character at a time printers. 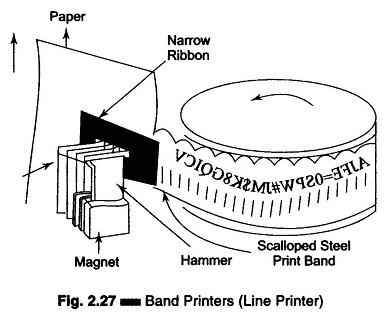 An embossed type font is positioned across a line for printing by using em­bossed type, either on a carrier consisting of a chain, train or band moving horizontally across the paper and print line, or a drum rotating in front of the paper with characters embossed. Typically, there are 132 columns on the drum. As the drum rotates, the column of characters pan vertically across the paper and the print line (shown in Fig. 2.27). In both methods, hammers (one for each of 132 print positions) strikes when the correct character is positioned, imprint­ing the character on the paper with an inked ribbon.

In band printers, a metallic or plastic band has a fully formed etched charac­ter on it. The band rotates at high speed. There is one hammer for one print position, because several hammers can strike simultaneously for many print positions. These printers are faster than dot matrix printers. These line printers have speeds varying from 75 to 4000 lines per minute (1 pm). These printers are both noisier and costlier than dot-matrix printers.

A chain printer is similar to a band printer, except that in the former the characters sets are held in a metal or rubber chain and rotated across the paper along a print line.

A chain revolves in front of the ribbon and paper. Each link in the chain is designed to hold a pallet on which type characters are embossed. Hammers are located behind the paper and each of 132 hammers strikes the moving type pallet when the desired character passes the position in which it is timed to print.

Figure 2.28 illustrates a drum printer. Each of the 64 or 96 characters used is embossed in 132 columns around the drum, corresponding to the print posi­tions. The drum rotates in front of the paper and ribbon. Print hammers strike the paper, imprinting characters from the drum through the ribbon and forming an impression on the paper. 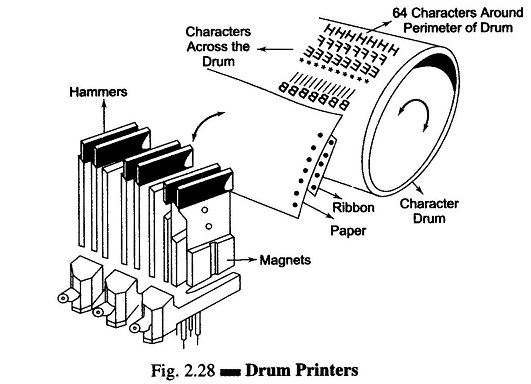 The drum printer uses a cylindrical drum which contains characters em­bossed around it. There is one complete character set for each print position. To print characters, magnetically driven hammers in each character position strike the paper and ribbon against the spinning drum. An entire line of characters can be printed during each rotation of the drum. Printing speeds of drum printers vary from 200 — 300 1pm. The drawbacks of drum printers are that the fonts are not easily changeable, and the print lines may be wavy.

Dot matrix characters are formed by printing a group of dots to form a letter, number or other symbol. This method is widely used with mini and micro com­puters.

Dots are formed both by impact and non impact print methods and are both character at a time and line at a time printers. 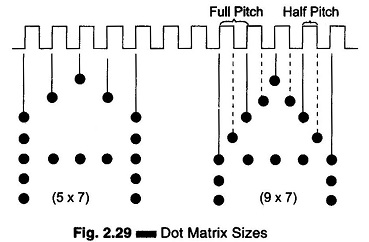 Figure 2.29 shows the letter ‘A’ formed by a dot-matrix, five dots wide and seven dots high (5 x 7) and in a 9 x 7 matrix. A 5 x 7 dot-matrix is frequently used when all letters are acceptable, in upper case.

Dot-matrix printers can print any combination of dots with all available print positions in the matrix. The character is printed when one of 128 ASCII codes is signaled and controlled by the ROM (read only memory) chip, which in turn controls the patterns of the dots. By changing the ROM chip a character set for any language or graphic character set can be used by the printer.

The print head for an impact dot matrix character is usually composed for an array of wires (or pins) arranged in a tabular form, that impact the character through an inked ribbon, as shown in Fig. 2.30. For this reason, these Classification of Printers are sometimes also called wire printers. 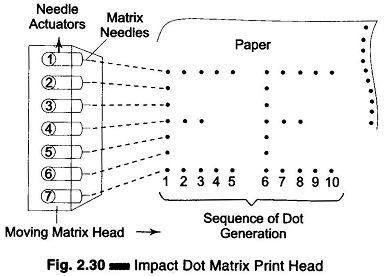 The Print head often contains a single Column seven wires high, though it may be two or more columns wide (fid. 2.31(a)).

For purpose of illustration, assume that the print head contains a single col­umn seven wires high. The seven wires are thrust from the print head (usually electromagnetically) in whatever combination the print controller requires to create a character. The wire strikes the ribbon and in turn impacts the paper, printing one vertical column of a single character. 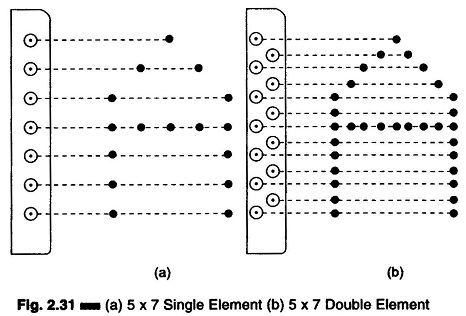 For a 5 x 7 full step dot-matrix character, the print head spaces one step, prints the second column of dots and repeats the pricess until all five columns are printed.

If the Classification of Printers is designed to print dots in half steps, the same process is used, except that five horizontal print steps are used to form the characters (the five normal steps, plus four intervening half steps), thereby forming a 9 x 7 half step dot matrix character.

Early dot-matrix print heads had only seven print wires, and consequently poor print quality. Currently available dot-matrix printers use 9, 14, 18 or even 24 print wires in the print head. Using a large number of print wires and/or printing a line twice with the dots for the second printing offset slightly from those of the first, ensures a better quality of print (Fig. 2.31 b).

Common speeds of dot-matrix printers range from 50 — 200 cps, but Classification of Printers with speed as high as 300 cps are also available.

The dot-matrix codes of the characters are stored in EPROM. The fonts or print graphics can be changed under program control. This is the main advan­tage of dot-matrix printers.

The font of dot-matrix printers can be changed during printing by including the desired formats in RAM or ROM. Hence, it is possible to include standard ASCII characters, italics, subscripts, etc. on the same line. Special graphics can also be programmed into the printer.

Non-impact dot-matrix printers cause a mark without directly touching the paper. They are therefore quiet compared to impact printers.

They cannot make carbon copies, however, as there is no force to impress the character through multiple carbon copies. NIDM printers are useful for printing single copies of computer output, for recording the output of printing calculators and video displays, and for logging industrial data.

There are four types of NIDM printers thermal, electrosensitive, electro­static, and ink jet.