The basic Practical PMMC Movement (also called a D’Arsonval movement) offers the largest magnet in a given space, in the form of a horse-shoe, and is used when a large flux is required in the air gap. The D’Arsonval movement is based on the principle of a moving electromagnetic coil pivoted in a uniform air gap between the poles of a large fixed permanent magnet. This principle is illustrated in Fig. 2.1 With the polarities as shown, there is a repelling force between like poles, which exerts a torque on the pivoted coil. The torque is proportional to the magnitude of current being measured. This D’Arsonval movement provides an instrument with very low power consumption and low current required for full scale deflection (fsd). 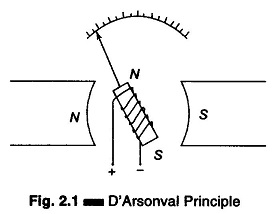 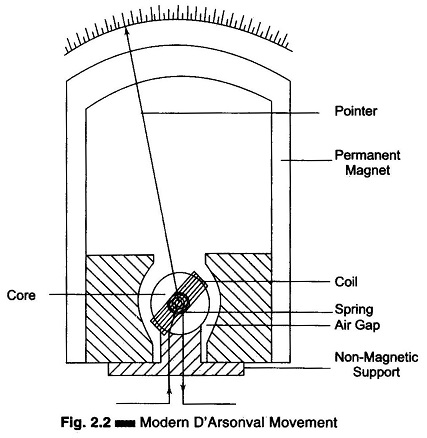 The coil is wound on a light metal frame and is mounted so that it can rotate freely in the air gap. The pointer attached to the coil moves over a graduated scale and indicates the angular deflection of the coil, which is proportional to the current flowing through it.

The Y-shaped member shown in Fig. 2.3 is the zero adjust control, and is connected to the fixed end of the front control spring. An eccentric pin through the instrument case engages the Y-shaped member so that the zero position of the pointer can be adjusted from outside. The calibrated force opposing the moving torque is provided by two phosphor-bronze conductive springs, nor­mally equal in strength. (This also provides the necessary torque to bring the pointer back to its original position after the measurement is over.) 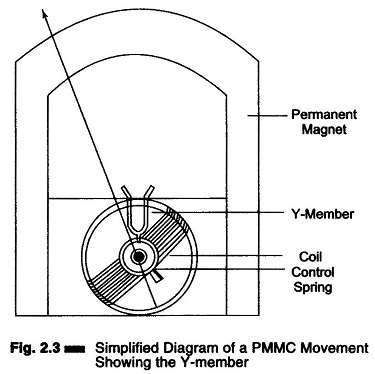 The accuracy of the instrument can be maintained by keeping spring per­formance constant. The entire moving system is statically balanced at all posi­tions by three (counterweights) balance weights. The pointer, springs, and piv­ots are fixed to the coil assembly by means of pivot bases and the entire mov­able coil element is supported by jewel bearings.

PMMC instruments are constructed to produce as little viscous damping as possible and the required degree of damping is added.

In practice, however, the instrument is usually slightly underdamped, caus­ing the pointer to overshoot a little before coming to rest.

The various methods of damping are as follows.

One of the simplest methods is to attach an aluminium vane to the shaft of the moving coil. As the coil rotates, the vane moves in an air chamber, the amount of clearance between the chamber walls and the air vane effectively controlling the degree of damping.

Some instruments use the principle of electromagnetic damping (Lenz’s law), where the movable coil is wound on a light aluminium frame. The rota­tion of the coil in the magnetic field sets up a circulating current in the conduc­tive frame, causing a retarding torque that opposes the motion of the coil.

A Practical PMMC Movement movement may also be damped by a resistor across the coil. When the coil rotates in the magnetic field, a voltage is generated in the coil, which circulates a current through it and the external resistance. This produces an opposing or retarding torque that damps the motion. In any galvanometer, the value of the external resistance that produces critical damping can be found. This resistance is called critically damping external resistance (CDRX). Most voltmeter coils are wound on metal frames to provide Electro-Magnetic damp­ing. The metal frames constitute a short-circuit turn in a magnetic field.

Ammeters coils, are however wound in a non-conductive frame, because the coil turns are effectively shorted by the ammeter shunt. The coil itself provides the EM damping.

If low frequency alternating current is applied to the movable coil, the de­flection of the pointer would be upscale for half the cycle of the input wave­form and downscale (in the opposite direction) for the next half. At power line frequency (50 Hz) and above, the pointer cannot follow the rapid variations in direction and quivers slightly around the zero mark, seeking the average value of the ac (which equals zero). The PMMC instrument is therefore unsuitable for ac measurements, unless the current is rectified before reaching the coil.

The power requirements of D’Arsonval movements are quite small, typi­cally from 25 — 200 μW.

The accuracy of the instrument is generally of the order of 2 — 5% of full scale deflection.

The permanent magnet is made up of Alnico material.

Scale markings of basic dc PMMC instruments are usually linearly spaced, because the torque (and hence the pointer deflection) is directly proportional to the coil current. The basic PMMC instrument is therefore a linear-reading device.

The advantages and disadvantages of Practical PMMC Movement are as follows.