The Circuit which represents op-amp parameters in terms of physical components, for the analysis purpose is called equivalent circuit of an op-amp. The Equivalent Circuit of Practical Op Amp is shown in the Fig. 2.8. 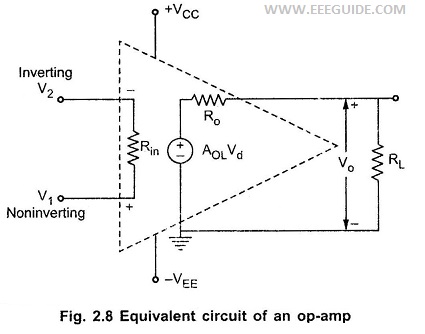 The Equivalent Circuit of Practical Op Amp shows the op-amp parameters like input resistance, output resistance, the open loop voltage gain in terms of circuit components like Rin, Ro etc. The op-amp amplifies the difference between the two input voltages.

The output voltage is directly proportional to the difference voltage Vd.

The equivalent circuit plays an important role in analyzing various op-amp applications as well as in studying the effects of feedback on the performance of op-amp.