A box representing a two-port network is illustrated in Fig. 11.1. The terminal behavior of a two-port device may be specified by two voltages and two currents (voltage v1, and current ii at the input port and voltage v2 and current i2 at the output port). The conventional positive polarities of voltages v1 and v2 and currents i1 and i2 are shown in the figure. Out of four quantities (v1, v2, i1 and i2), any two may be selected as independent variables and the remaining two be expressed in terms of the selected independent variables. This leads to various two-port parameters, out of which following three are more important.

For the two-port network illustrated in Fig. 11.1, if input current i1 and the output voltage v2 are taken as independent variables and the two-port shown in the figure is linear, we may write

If the input terminals are open circuited and we drive the output terminals with voltage v2, as shown in Fig. 11.3, input current i1 becomes zero and Eqs. (11.1) and (11.2) become

Similarly h22 is the ratio of output current to the output voltage with zero input current (i.e. i1 = 0). It is called the open-circuit output admittance and is measured in siemens. The subscript 22 in h22 indicates that it is determined by a ratio of output quantities.

2. Notations: The convenient alternative subscript notations recommended by the IEEE Standards are given below:

Notations used in transistor amplifier for the three configurations are tabulated in Table 11.1. 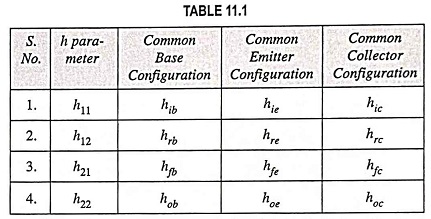 Since the two-port network (or the device) described by Eqs. (11.1) and (11.2) is assumed to have no reactive elements, the four parameters h11, h12, h21 and h22 are real numbers and voltages and currents v1, v2, and i1, i2 are functions of time. However, if the reactive elements had been included in the device, the excitation would be considered to be sinusoidal, the h parameters would in general be functions of frequency, and the voltages and currents would be represented by phasors V1, V2, and I1, I2.

The input circuit derived from Eq. (11.1) appears as a resistance h11 in series with a voltage generator h12v2. The output circuit, derived from Eq. (11.2) consists of a current generator h21i1 and shunt resistance 1/h22. This circuit is called hybrid equivalent because its input portion is a Thevenin’s equivalent (or a voltage generator in series with a resistance) while the output portion is a Norton’s equivalent (or a current generator with shunt resistance). Thus it is a mixture or hybrid. The symbol ‘h’ is simply the abbreviation of the word hybrid (hybrid means “mixed”).

The hybrid equivalent circuit (or model) given in Fig. 11.4 is an extremely important one in the area of electronics today. It will appear over and over again in the analysis to follow. There are two main reasons of popularity of hybrid model. First, it isolates the input and output circuits, their interaction being accounted for by the two controlled voltage and current sources—the effect of output upon input is represented by the equivalent voltage generator h12v2 and the effect of input upon output is represented by the current generator h21i1. The value of the former depends upon the output voltage v2 while the value for the latter depends upon the input current i1. Secondly, the two portions of the circuit are in a form which makes it simple to take into account the source and the load circuits.