Two Dimensional Motion in a Uniform Electric Field – Let us consider that an electron enters the region between two parallel plates of a parallel plate capacitor oriented as illustrated in Fig. 3.5 with an initial velocity vox m/s in the +X direction. It is assumed that the electric field ε between the plates is uniform and, as chosen, it is in the direction of –Y axis, no other fields existing in the region. 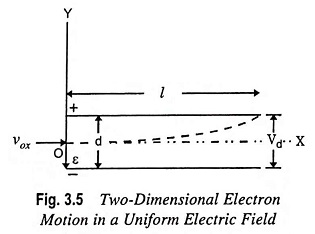 Since there is no force in the Z direc­tion, the acceleration in that direction is zero and, therefore, the component of veloc­ity in the Z direction remains constant. Since the initial velocity in this direction is assumed to be zero, the motion must take place entirely in one plane, the plane of the paper or X-Y plane.

For a similar reason the velocity along the X-axis remains constant and is equal to vox i.e.,

On the other hand, a constant acceleration exists along the Y-direction, and the two dimensional motion in a Uniform Electric Field is given by equation

The above equations indicate that in the region between the plates, the electron is accelerated upward, the velocity component vy varying from point to point, whereas the velocity component vx remains unchanged in the passage of the electron from one plate to another one. The path of movement of electron with respect to point O is readily known by combining Eqs. (3.14) and [3.15(b)], the variable t being eliminated.

This leads to the expression

The above equation indicates that the particle moves in a parabolic path in the region between the plates.